Manifest and Batwoman Panels Are Headed to WonderCon 2021 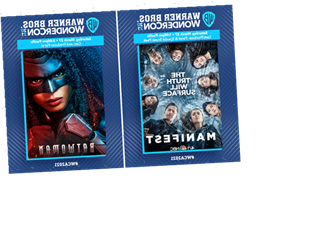 This year’s WonderCon will bring a Bat and an enigmatic plane mystery to the main stage. The two-day virtual event, taking place March 26-27, will see the casts of Manifest and Batwoman assemble to discuss those season-long burning questions and tease what’s ahead.

On Saturday, March 27 at 1 pm PT, join Manifest’s Melissa Roxburgh, Josh Dallas, Athena Karkanis, J.R. Ramirez, Luna Blaise, Jack Messina, Parveen Kaur, Matt Long and Holly Taylor along with showrunner Jeff Rake for a review of Season 2 and then a sneak peek at the first five minutes of Season 3. Moderated by TVLine Editor-in-Chief Matt Webb Mitovich, the panel will even tackle a few TVLine reader Qs sent into our Inside Line column.

Manifest‘s new season, premiering Thursday, April 1 at 8/7c on NBC, takes place more than a year since the passengers of Flight 828 resurfaced and the discovery of others who have mysteriously returned. “While the Stone family struggles to keep their friends safe and make their enemies believe the unbelievable, new challenges will test their trust of the callings and each other. But sticking together is more important than ever, because no matter what happens, it’s all connected,” the official description reads.

At 2 pm PT, the cast of Batwoman will gather to break down Season 2’s biggest moments thus far and preview what’s still in store for Gotham’s newest hero in the remaining episodes airing Sundays at 8/7c on The CW.

Stars Javicia Leslie, Rachel Skarsten, Meagan Tandy, Nicole Kang and Camrus Johnson, along with showrunner Caroline Dries will be on hand for an immersive chat as well as a lively round of Batwoman-themed trivia and behind-the-scenes looks at the show’s costumes and the Batmobile.

The panel will be moderated by TVLine Staff Editor Keisha Hatchett.

Are you hyped for this year’s WonderCon? Drop a comment with your thoughts below!