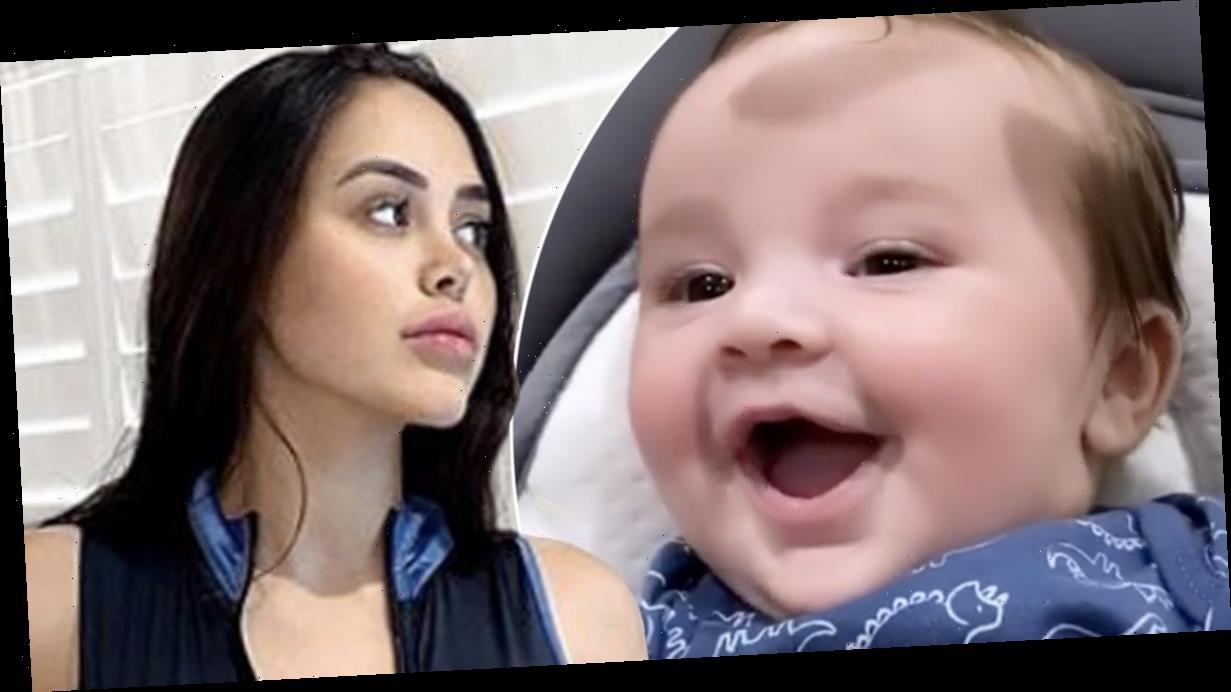 Taking to her Instagram Stories, the 28 year old shared a series of videos showing her little one in a dinosaur-patterned blue and white sleepsuit.

Sitting in a baby rocker, Rox could be seen smiling as his mum said: "You just laughed before! Come on," before repeatedly saying "Cheeky boy!" to entice a giggle out of him.

She and boyfriend Casey Johnson, who welcomed Rox last year, didn't have to wait long before their son burst out into a little laugh.

Obviously excited by the development, one of Marnie's three Chihuahua's joined in on the fun as they began barking in the background.

Marnie, who recently sent pulses racing as she showed off her post-baby body in a swimsuit, wrote over the clip: "Can't believe my little boy just laughed for thr first time [sic]."

In another short video, the proud mum could be heard saying: "Casey I can't believe he's laughing, watch," before Rox came out with another round of laughter.

She wrote over this, saying: "I can't believe it, I love him so much this has made my night".

It comes as Marnie recently opened up about her worry over one of her dogs being "jealous" of her baby son.

The new mum, who recently declared she "hates cheaters", appealed to her 3.7million Instagram followers for advice on how to stop one of her Chihuahuas, ironically called Envy, from being needy after the arrival of her son in October.

Speaking in an Instagram video, Marnie said: "So guys, I’m having so much trouble with one of my dogs, Envy."

She added: "She’s really jealous of Rox and she’s become so needy to the point like she won’t leave me alone. I’m just a little worried I don’t want her to feel like this.

"Anyone got any tips on what to do to try and combat this because I just feel so guilty."

Just a few days before her concerned appeal, Marnie shared a photo of herself, Rox and Envy sat on her sofa and vowed her son and dog would be “besties“ one day in the caption.

During her pregnancy with Rox, Marnie exclusively revealed to OK! magazine that she had decided to give away two of her five Chihuahuas after discovering she was pregnant.

Speaking to us at the time, she said: "I have three Chihuahuas called Savvy, Envy and Smith.

"I used to have five but when I found out I was pregnant I had to give them back to the original owner.

"I know myself and I wouldn’t cope with a baby and five dogs!"