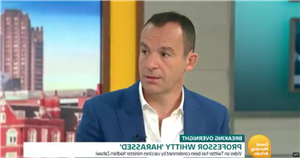 MoneySavingExpert.com founder Martin Lewis has hit back at Sir Alan Sugar after he bizarrely declared he wanted to punch him in the face.

The Apprentice star said on Twitter there was no real reason he wanted to injure the money-saving guru – but that his face is on a list of people he wants to hit.

Alan, 74, re-tweeted a story about Martin, 49, who has recently been a host on Good Morning Britain, as he made his angry statement.

He wrote: "I often discuss with my wife about people faces you would like to punch for no real reason. I know it’s not fair, they may be perfectly nice people. She has her list of faces. Martin Lewis is one of mine. He is most probably a nice guy. I am sure some people think the same about me."

He later added: "Michael Gove is another face I would like to punch. Never met him thought (sic)."

But Martin hit back, saying he was confused why the businessman tweeted about him and said he was not going to argue about it.

He said: "I don't understand the point of this tweet or of copying me in. If you're trying to start an argument I'm not biting. It's unnecessary, and if I may suggest would be best for all if you deleted."

Alan also come under fire from other social media users, with many branding his remarks "odd" and "strange".

One said: "Strange thing to post for everyone to see!"

A second wrote: "Immature and unnecessary what a weird tweet from a fully grown man."

A third added: "Massive lack of judgement in tweeting something like this. What happened to be kind?"

Martin shocked Susanna Reid on GMB earlier this week when he recalled a 'scary' encounter with a fan.

Martin told about his interaction with a man who approached him as he was taking his three-year-old daughter to the park.

He said: "Well, the concept is, if you are known, you are owned.

"I will always remember when my daughter was three or four, I was taking her to the playground, she was on my shoulders and I was walking along the road with her.

"Well, he started calling me a name that begins with a C and he followed me down the road shouting at me, 'you are…' you know what the word is.

Susanna asked: "While your three-year-old is sitting on your shoulders?"

Martin then added: "Now, I have to say I normally when people come and talk to me in the street, I’m always happy to do it, I smile, I'm always politely nice.

"But my little girl, understandably is a child, can get very scared when strangers approach.

"I will never forget that episode, because it made me intimidated to go down the street. It was scary, I was trying to protect her."

"A man came up to me and he says, ‘you’re the money guy aren’t you?’ and I said with a smile, ‘not today I’m daddy’. She gets very scared when people we don’t know approach."

"And he said, ‘I just want to ask you a question'. I said, ‘I’m so sorry, I’m on my way to the playground, I really can’t do this right now, she gets a little intimidated.

"Well, he started calling me a name that begins with a C and he followed me down the road shouting at me, 'you are…' you know what the word is."