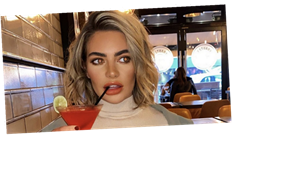 Stunned Megan Barton-Hanson claimed she was called a "big fat lesbian" by her brother's girlfriend.

The former Love Island star revealed the cruel comment that was made to her after starting to explore her sexuality.

The 26 year old was subjected to the slur after revealing she was going to meet up with a woman.

It was a date with someone her brother's girlfriend happened to know – and that's when Megan was met with the rude remark.

Chatting to her ex Demi Sims on her podcast You Come First, Megan talked about her early days after accepting she was bisexual.

The beauty explained: "I had no gay friends, and I didn't know what it was like to even date a girl.

"There was nothing in Southend for a gay community or anyone I knew.

"I got this app called HER, it's like a lesbian dating app," the star continued.

"I matched with someone, set up a date and before I went out for the date my brother's girlfriend, who lived with us, burst in the door and took a seat on my bed all serious.

"And she was like, 'Turns out you are going out with a girl who works at my work, so can you just confirm you're not a big, fat lesbian?"

Megan said that bitter experience put her off dating apps and it set her back.

The star added: "Imagine that, the first time I'd ever had the confidence to meet a girl this girl who is quite close to me comes in and is homophobic and rude about it. Mortifying.

"So I wouldn't rush into the apps – because it was a disaster for me."

Megan is in a great place after buying her first home in 2020.

She opened up about the purchase – saying she could only afford the London pad because of the cash she earns from her racy OnlyFans account.

But she also spoke recently about how she went into a loneliness spiral at the start of the year.

"I think before the first initial lockdown I was kind of in a hurry to be with someone and have children," she told The Sun.

"I feel like every woman – because of society – has this pressure to be with someone, have a partner and you think your time is ticking to have a baby.

"They are too afraid maybe, because of the old fashioned stereotype and stigmas of 'oh man up', but I think it's really important to be open about loneliness.”

"Since the first lockdown I've got to know myself more."