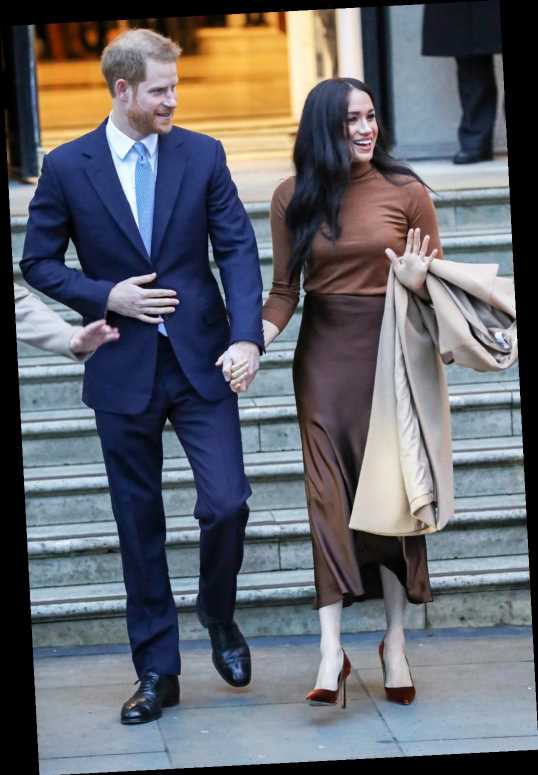 In revealing new details of their official exit from royal life, Meghan Markle and Prince Harry will no longer use their titles of “His/Her Royal Highness.”

As previously stated in the agreement reached between Queen Elizabeth and the couple in January, Meghan and Harry will still retain their titles, but not longer use them as they officially step back from the royal family on March 31.

“The Duke and Duchess of Sussex remain members of the Royal Family and remain named and titled, as such. As explained in the January announcement, from Spring they will formally retain their titles of ‘His/Her Royal Highness’ but no longer actively use their ‘HRH’s,” a Sussex spokesperson said in a statement released by Buckingham Palace on Monday.

Meghan and Harry will continue to be known as The Duke and Duchess of Sussex, as well as by their titles of The Earl and Countess of Dumbarton and The Baron and Baroness Kilkeel.

“As the grandson of Her Majesty and second son of The Prince of Wales, Prince Harry, The Duke of Sussex, remains sixth in line to the throne of the British Monarchy. The Order of Precedence is unchanged,” the statement continued.

The couple shared what will be their last post on their joint @SussexRoyal Instagram page on Monday — one day before they will officially step down from their roles as senior working members of the royal family.

It was also revealed Meghan and Harry “will spend the next few months focusing on their family and continuing to do what they can, safely and privately, to support and work with their pre-existing charitable commitments while developing their future non-profit organisation,” according to their spokesperson.

As was previously agreed upon with the Royal Family, the Duke and Duchess of Sussex will no longer use the name Sussex Royal for their charitable organization, Instagram or website. “For now, there will be no additional information on their next steps,” said the spokesperson.

The Sussex Royal Foundation — the charitable organization Meghan, 38, and Prince Harry, 35, started after breaking away from the Royal Foundation, which they previously headed alongside Prince William and Kate — has begun their “winding-up process,” according to the spokesperson. However, they plan to continue supporting their patronages.

And Travalyst, Harry’s environmental tourism initiative launched in September, is in the process of becoming an independent non-profit organization based in the U.K.

Catherine St. Laurent — a former Bill and Melinda Gates Foundation staffer — will start her role as both chief of staff and executive director of their new non-profit organization in the beginning of April, says the spokesperson.

Going forward, Buckingham Palace will no longer comment on enquiries related to Prince Harry and Meghan. In addition, “no other royal communications representatives act on behalf of the Duke and Duchess of Sussex, including palace spokespeople, Household representatives nor royal sources,” according to Monday’s statement.

The couple’s communications will be managed for the time being by U.S. agency Sunshine Sachs, who were initially engaged to do communications support for Sussex Royal Foundation, in addition to James Holt in the U.K.

The couple have been living in a secluded compound in L.A. since leaving their Vancouver Island home — a move they made before the United States’ border with Canada was temporarily closed to nonessential travel on March 21.

The Duke and Duchess of Sussex are now settling in with their 10-month-old son Archie and adhering to the recommended guidelines amid the coronavirus pandemic. And they are using their quiet time at home to find ways to support others, while admitting that self-isolation and social distancing is “a lot to take in.”

As information about the coronavirus pandemic rapidly changes, PEOPLE is committed to providing the most recent data in our coverage. Some of the information in this story may have changed after publication. For the latest on COVID-19, readers are encouraged to use online resources from CDC, WHO, and local public health departments and visit our coronavirus hub.