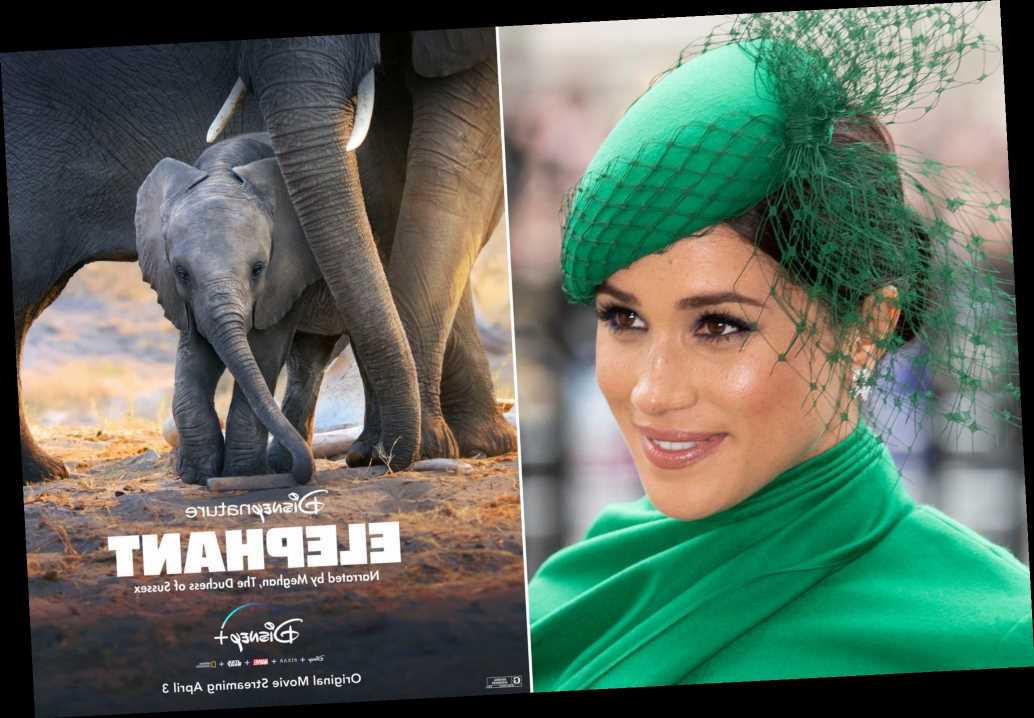 More than three years after quitting her acting career for love, former “Suits” star Meghan Markle is back in the showbiz saddle again.

A new trailer dropped Thursday by Disneynature confirms that the 38-year-old, who married Britain’s Prince Harry in May 2018, will narrate the upcoming documentary “Elephants,” due to livestream on Disney+ beginning April 3.

Mother-of-one Markle, who is joining her husband in turning their backs on royal life effective March 31, accepted and recorded the gig with Disney before the couple’s decision to break ranks from the Windsor family in favor of Megxit.

Despite taking leave of her official royal duties, the film studio still hypes Markle as the “Duchess of Sussex” in the new promo clip.

The plot of “Elephants” revolves around African pachyderm Shani and her rambunctious son, Jomo, as their herd makes a pilgrimage hundreds of miles across the Kalahari Desert.

They are led by their indomitable matriarch, Gaia, and face hardships along the way as they follow in the footsteps of their ancestors on a mission to reach a lush, green paradise. The challenges they face include brutal heat, dwindling resources and threats from predators.

Proceeds from the film will benefit Elephants Without Borders, a charity believed to be close to Meghan and Harry’s hearts.

It’s not the first time that Disneynature has partnered with A-list celebrities. Meryl Streep and Morgan Freeman have voiced different projects, with profits similarly aiding organizations supporting wildlife and conservation.

Meghan’s role in the film will hardly surprise fans who watched video of her and Harry attending the premiere of Disney’s remake of “The Lion King” in London in July 2019.

A clip from the event showed Harry, 35, sharing a brief chat with former Disney CEO Bob Iger when the prince hinted at the possibility of lining up some future work for his spouse.

“You know she does voiceovers,” Harry can be heard saying in the video.

The soon-to-be former senior royal, president of African Parks and patron of the Rhino Conservation Botswana, has concentrated much of his conservation work in Africa. He refers to the continent at his “second home” and most recently visited it in October, where he and Markle performed an official royal tour and filmed the documentary: “Harry & Meghan: An African Journey.”

The TV film gave viewers a glimpse into the unhappiness of the new parents, whose baby son, Archie, was born in May 2019. Asked how she was holding up to royal life and public scrutiny, Meghan famously told her interviewer: “It’s a lot.”

Perhaps, now that she has returned to the job she obviously loves – albeit not full-time –  she will find contentment.