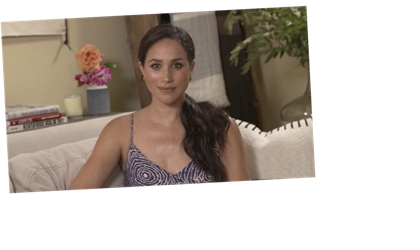 Just a few days after she demystified the sleeveless turtleneck, Meghan Markle appeared on a virtual chat wearing another throwback favorite: spaghetti straps. And while the seasonless silhouette isn't exactly revolutionary, it's been a while since Meghan's opted for such a decidedly casual look. During her appearance, Meghan spoke with Fortune's associate editor, Emma Hinchliffe, as part of the magazine's "Most Powerful Next Gen Summit." For the event, Meghan wore a patterned spaghetti-strap top and had her hair in a low ponytail. Meghan spoke about taking chances (ahem, like stepping back from being a royal, no big deal) as well as why she decided to distance herself from social media. Recently, she also opened up about feeling like the "most trolled person in the entire world."

"For my own self-preservation, I have not been on social media for a very long time," she said. "I had a personal account years ago, which I closed down and then we had one through the institution and our office that was in the U.K. that wasn't managed by us — that was a whole team — and so I think that comes with the territory for the job you have.

She went on to say that it's clear that social media can be addictive and that she's found it helpful not to engage with any of it.

"I've made a personal choice to not have any account, so I don't know what's out there, and many ways that's helpful for me," she continued. "I have a lot of concerns for people that have become obsessed with it. And it is so much a part of our daily culture for so many people that it's an addiction like many others. There are very few things in this world where you call the person who is engaging with it a user."

Meghan added that she's hopeful that even without specific online platforms, she can connect to people (through virtual chats, perhaps?) and share what she wants to on her own terms.

"Everything I’m doing is for Archie, our son … There's a lot that I'm excited about — certainly in creating programming and content that is conscious and inspiring and has a call to action and is uplifting," she said. "And I'm excited to be back home in the States and hopefully as things start to open up a bit more with COVID, just to be back and engaging and interacting with people in a different way and in a way that will allow me to roll my sleeves up and really be boots on the ground back at home."