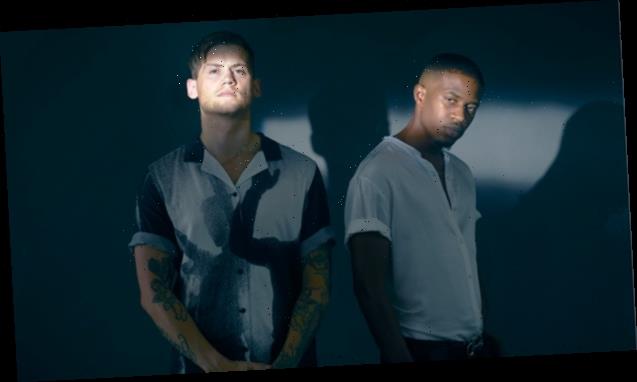 If there’s anything we need right now, it’s a reason to smile. Thankfully, duo MKTO – and a Delorean – are here to brighten your day by throwing a ‘Party With My Friends.’

Bless MKTO. After a week that saw festivals canceled, sports seasons postponed, and millions isolated from each other in quarantine due to the coronavirus outbreak, it’s like the entire world is the dumps. It’s easy to fall into despair at the time, but MKTO – rapper/actor/Lost star Malcolm Kelley and singer/actor/Gigantic star Tony Oller – are here to raise our spirits. And they’re doing it by throwing a party! The duo, who took the pop world by storm with their song “Classic,” delivered the video for “Party With My Friends” on Mar. 13, and it couldn’t come at a better time. Starting off on an almost subdued-but-hopeful note, “Party With My Friends” captures that feeling of right when you get off of work before the weekend. It’s the uplifting anthem we need right now. It’s a song that doesn’t ignore what’s going on around in the world but acknowledges it while recognizing that joy, friendship, and happiness still exist, too.

Plus, the video(directed by Joe DeSantis, who has worked with Against The Current, Peter Thomas, and Emily Vaughn) has a DeLorean in it. How can you be sad in a DeLorean? “It’s a fun song, and we wanted it to be a fun music video,” Tony tells HollywoodLife. “It’s always awesome when you get to meet people who support you, and we all had a blast shooting it with Joe. Plus, anytime you get a DeLorean in a video, the coolness factor jumps 150%.”

“I would describe it as ‘a feel-good song,’” Malcolm says to HollywoodLife when discussing this new track. “People who like to have a good time should enjoy it.” Tony also weighs in on the “energy” of the track, and how it might help people escape the seemingly endless stream of bad news coming in. “We just enjoy putting out songs with positive energy that resonate with the listener. Especially when there’s a lot of stuff going on in the world, hopefully, they can escape for a few minutes.”

It’s been ten years since Malcolm and Tony’s paths first crossed. The two first met on the Nickelodeon series Gigantic, in which their characters played best friends. From there, they formed the band MKTO. They released their first song, “Thank You,” in 2012. Their 2013 song “Classic” saw the band break into the US Billboard Hot 100, with the track peaking at No. 14 (and has since been certified double-Platinum in the US.) The group made their highly-anticipated return in 2018 with “How Can I Forget,” which has racked over 68 million streams since its debut. 2019 saw them release three more songs – “Shoulda Known Better,” “Marry Those Eyes,” “Consider Me Yours,” – and this “Party With My Friends” marks their first song of the year.

In addition to music, Malcolm and Tony have stayed busy acting. Malcolm appeared in the critically-acclaimed film Detroit, and Tony has had roles in The Thundermans, Gigantic, and CSI: NY.