Molly Hopkins: It’s Time for My New Man to Meet My Kids 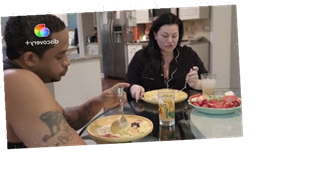 But life goes on, and she’s getting another shot at love on 90 Day: The Single Life.

Molly’s life isn’t quite so single anymore though, as things are serious with Kelly.

Their sex life is explosive. And things are so good that she’s ready for him to meet her daughter.

We’ll get into Molly and Kelly’s, um, sexual rapport in a moment.

Because it’s more of their emotional bond that we need to get into in the moment.

Molly is a 45-year-old from Georgia. And Kelly is a police officer from New York.

Molly is preparing for Kelly to meet Kensley.

Kensley is 10 and has some developmental issues.

(Molly also has another daughter, Olivia Hopkins, a beautiful 21-year-old)

On 90 Day: The Single Life, Molly spoke to the camera about how this meeting will be important.

“Even though he had seen her on FaceTime and talked to her almost every day,” Milly explained.

“And,” she continued, “they have built that rapport with each other.”

Molly characterized: “when you just have a conversation with Kensley, it’s very hard to understand that she actually has a disability.”

“When you have a child that has a fragmented chromosome and approaches life in a different way,” she detailed.

“And you’re in a new relationship and it’s time for them to meet your kid,” Molly added.

Molly explained: “you have to have the conversation to really let your partner understand your kid.”

“She’s brilliant,” she affirmed to Kelly.

“When she’s talking to me when I’m upset,” Molly detailed, “her reasoning and logic is so smart.”

“She has normal conversations with you,” Molly explained to Kelly.

“She uses big words in the right context,” she added.

“But,” Molly continued, “she can’t tie her shoes.”

She added: “This is part of my crazy world.”

“She’s going to come today and everything may be just fine,” Molly said, “but you never know when something might happen.”

Kensley is also very sensitive to conflict and physical touch.

It can sometimes be an adjustment for new people to realize what she can and cannot do.

Worse — someone might think that she’s faking what she cannot do. Some people are so cruel to disabled kids.

Molly of course doesn’t think that Kelly’s going to treat Kensley like garbage.

But she wants things to go smoothly when they meet in person.

This is for Kelly and Kensley’s benefits, and for Molly to see how viable they’ll be as a couple.

The Single Life viewers were also treated to Molly and Kelly’s morning after.

In bed, the two described their loud, explosive, animalistic sex from the night before.

Touchingly, Molly also detailed how they’d just curled up and watched a movie after without it being “weird.”

Dating as a single parent is more complicated than dating when it’s just you.

You’re effectively dating for multiple people — because your partner will become part of your child’s life in some form.

It’s not easy, and it can be nerve-wracking trying to make smart choices for the best of everyone. Good for Molly for putting so much thought into it.