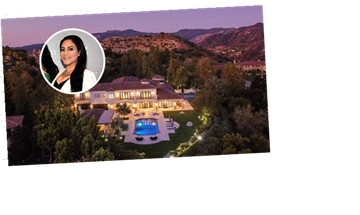 When “The Biggest Loser” executive producer David Broome sold his lavish Calabasas mansion back in summer 2017, he came out a big winner — the $8.1 million sale price was nearly $3 million more than he had paid for the property five years prior. Located in the so-called “Estates of the Oaks” enclave high in the Calabasas mountains, the property is accessible only by passing through two community gates, one of them guarded 24/7, and boasts a bevy of celebrity neighbors.

And the large manor, dubbed Chateau Sueños (“House of Dreams”) is no stranger to fame itself. Prior to Broome’s purchase, it was leased for about two years to pop star Britney Spears, who reportedly spent about $700,000 — this on top of her monthly rent — into putting her own custom stamp on the home’s decor.

The $8.1 million buyers, a clearly rich but non-famous married couple, quickly set about giving the 2007-built, Tuscan-style mansion a contemporary facelift. According to permits, they reconfigured the upstairs master suite, installed large walls of bi-fold glass doors, added a glass-enclosed wine closet and installed a new sports court, among myriad other improvements. After completing those upgrades, they recently listed the property, which sold almost immediately for $11.25 million.

That sale price is, by a narrow margin, the most ever paid for a home in the exclusive Oaks of Calabasas, where other homeowners include Travis Barker, Kourtney and Khloe Kardashian, Michael Jackson’s mother Katherine and Dr. Phil’s son Jay McGraw. Justin Bieber was also an Oaks homeowner, albeit briefly — during his tenure, he (in)famously terrorized his neighbors with egg-throwing mischief.

Tawil and her older brother Chris Tawil co-founded Morphe, which began in 2008 as a trade-show brand that exclusively sold makeup brushes. The pair had dreams of growing the company into a full-fledged cosmetics company, however — by 2013, Linda had begun to personally reach out to some of Instagram and YouTube’s top influencers to spark product collaborations.

That innovative social media strategy, back when YouTuber careers were just taking off and Instagram was still in its bright-eyed infancy, proved to be a veritable goldmine for Morphe. Tawil’s makeup collaborations with Jaclyn Hill, in particular, have reportedly raked in tens of millions of dollars, and Tawil’s close friendship with Jeffree Star has led to Morphe being the exclusive physical retailer to carry many of his new cosmetics launches, all of which sell out almost instantly.

Morphe became extremely popular within a very short period of time; by 2017, the Tawil’s had reportedly sold a stake in their company for hundreds of millions. And in 2019, it was announced that private equity firm General Atlantic would take a majority stake in the company, in a deal that valued the former little brush brand at more than $2 billion.

Of course, Tawil’s rapid rise and influence on the YouTube’s beauty community has also beget some unwanted headlines. She was referenced by name in the infamous Dramageddon 2.0 scandal involving beauty gurus James Charles and Tati Westbrook. In Westbrook’s original video, which racked up nearly 50 million views in a matter of days, she spilled all the proverbial tea on Charles, noting that Tawil’s collaboration with him put “literally millions of dollars into his bank account.”

Tawil, who is divorced and in her late 30s, now presides over a sprawling mansion with upwards of 10,500 square feet of living space, a four-car garage and a sparkling pool set into the grassy backyard. Views take in the rugged Calabasas mountains and the surrounding San Fernando Valley.

Since the property was “sold before processing,” photos of the renovated estate are slim. But the home is described in marketing materials as a “modern chateau” and offers a spacious gated motorcourt and big-picture windows, allowing plenty of natural light to filter through the estate. The house also happens to be in the very same gated community as the $9.25 million mansion that Chris Tawil bought back in 2018.

And although Tawil’s new $11.3 million manse currently ranks as the priciest property in the Calabasas Oaks, it isn’t even her most expensive home in the general area. Back in 2017, she spent $12.55 million for an even larger mansion in nearby Hidden Hills, Calif. that happens to be right next door to the $12.5 million vacant lot her brother bought from Dr. Dre. (It does not appear that Tawil has ever actually moved into the Hidden Hills house, which is believed to be undergoing some sort of extensive renovation.)