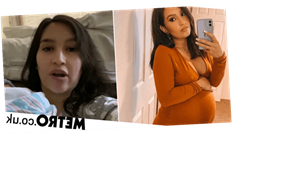 A woman who was so adamant she didn’t want any more children that she elected to be sterilised, has become a surrogate for complete strangers.

Prizzilla Greer and her husband Skylar, thought they were done having children after they had their two babies Nixon and Lo.

During her second c-section in January 2016, doctors even performed a female sterilisation at her request.

But after seeing a friend’s post about surrogacy on Facebook in September 2018, Prizzilla filled out an inquiry form.

Just a month later, Hawaii Surrogacy Centre matched her with a gay couple, and she was able to carry the embryo created by IVF.

I actually didn’t intend on having kids – from a young age, I didn’t really care to have them,’ says Prizzilla, who is from Oahu, Hawaii.

‘Then when I met my husband, we unexpectedly got pregnant with my son and I loved it.

‘We wanted him to have a sibling so we tried to conceive a sibling when my son was six months old and it was successful –  I had my daughter and we had no issues.

Prizzilla says she began to hear stories from her friends about them struggling to get pregnant, which was new to her because no one in her family had ever had those problems before.

‘I felt some guilt knowing that this was someone’s dream to have a child all their life and someone like me, who never really planned for it, was able to do it right away,’ she explains.

‘I felt like I needed to do something to help, but I didn’t know what it was for a few years.’

‘I never even went on Facebook back then, but I just knew I was meant to be at that place, at that time to see that post,’ she says.

‘I just started crying because I felt like it was a sign that this is what I am supposed to do, even though I hadn’t put too much thought into it before.’

She met the intended parents – a gay couple in Australia who had been trying to have a child for more than 10 years – over Skype in October 2018.

And, after a series of medical checks, in May 2019, a single embryo was successfully implanted. Their baby boy was born on 18 January 2020.

‘Gestational surrogacy doesn’t require the surrogate to use her own egg, so I was able to carry the embryo that was already created by my intended parents and their egg donor,’ she explains.

Prizzilla has blogged the pregnancy on Youtube to normalise attitudes towards surrogacy, and her videos have received more than 17,000 views.

‘I just wanted to show people my side of things and kind of normalise it for others,’ she adds.

‘Maybe to spark something in someone else’s brain.

‘I don’t think I would have even thought about doing it had I not seen another average person post about it in a Facebook group.’

Do you have a story to share? We want to hear from you.