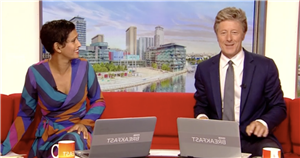 BBC Breakfast presenter Naga Munchetty was left fuming at Charlie Stayt on Friday, after a stray balloon put a stop to proceedings.

The presenting duo were sitting on the red sofa together as they headed over to Matt Taylor for the regular weather segment.

But filming soon descended into chaos, as after Matt had finished his weather report, Charlie and Naga became distracted by a stray pink balloon which had made its way through the sky behind Matt on the BBC roof.

The camera followed the balloon around as it made its way past Matt, and the hosts couldn't resist commenting on it from the studio.

"Matt, did you see the balloon?" Charlie quizzed, as Naga began: "Did everyone get that?"

"Wafting past, if you look to your right," Charlie explained. "A balloon, a pink balloon."

Naga couldn't believe her eyes, as she wondered: "Did it go in front of his face, or behind?", but Charlie was on hand to explain: "No, it just popped up behind, in between the buildings, sort of where that pigeon was and across the…"

Matt said: "I can see it disappearing into the distance. No idea where that came from."

Naga commented: "A little gift for you, Matt!", as Matt said: "Someone's having a good time this morning!"

But Charlie, not seeing the positive side, chimed in: "Or not, if it's a child who's lost their balloon, they're very upset."

And Naga wasn't happy with her co-presenter's pessimism, as she moaned: "Oh, Charlie!"

Though Charlie quickly apologised for the comment, Naga couldn't help but grumble: "What is wrong with you?"

"It's not… well, you know what I mean!" Charlie insisted.

It didn't seem Naga was holding a grudge against Charlie, however, as she grinned at him as the conversation quickly turned towards the concept of tipping in the restaurant industry.

But that wasn't the only chaotic incident on Friday's programme, as Strictly Come Dancing star Ugo Monye threatened to "flash" while being interviewed about his dancing experience so far.

The sports star admitted to entertainment correspondent Colin Patterson: "It's been unbelievable! From finding out what my chest size was to my collarbone to my bellybutton, to putting on sheer snakeskin tops to learning how to dance – but everything has just been amazing!"

To demonstrate his point, Ugo tugged at the sparkly snakeskin shirt he wore, revealing a wider triangle of toned chest.

Colin couldn't help but quip: "I thought you were going to give us a flash there!"

His professional partner Oti Mabuse couldn't help but widen her eyes as she purposely looked over at the floor – and away from Ugo's chest.

BBC Breakfast airs from 6am every day on BBC One.