Naga Munchetty slams Dominic Raab over French quarantine rules: ‘You must have a position’

Naga Munchetty, 45, was on hand to host BBC Breakfast today alongside co-star Charlie Stayt, 57, and the presenters discussed the latest headlines from across the globe, none more poignant than the recent developments emerging over the coronavirus crisis. To get a greater understanding on the matter, the pair welcomed Foreign Secretary Dominic Raab onto the BBC news show. With French President Emmanuel Macron, 42, urging the UK to reach a deal with their European neighbour to allow travel between the two countries without a 14-day quarantine in place, the government minister explained the issue in more detail. However, when he seemed to glance over what his interviewer was asking, she took him to task. 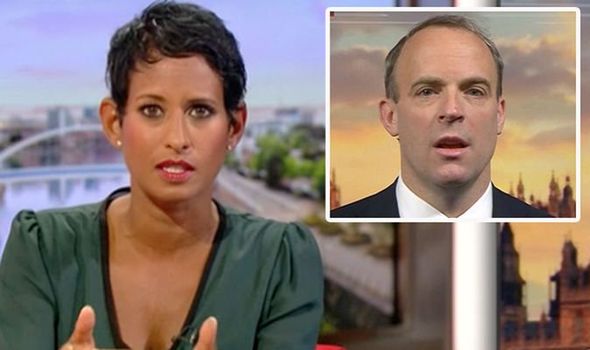 In his first visit to the UK and the first foreign minister to travel in the midst of the ongoing health care crisis, Macron will meet Prime Minister Boris Johnson, 55, later today.

The French President is making the journey to mark the 80th anniversary of the wartime Resistance where Charles de Gaulle’s BBC broadcast to occupied France after the 1940 Nazi invasion.

However, it is expected the politician will ask his British counterpart to relax travel regulations which are now in place whereby UK travellers will have to quarantine for 14-days when they return from abroad.

This action was announced by Home Secretary Priti Patel, 48, last month with the rules coming into force from the start of June.

As Munchetty grilled her interviewee on how the government was planning to respond to the request, she told Raab after he seemed to avoid the actual question: “You must have a position this morning. You’re not going to sit there and tell me and say ‘Shall we think about what we’re going to talk about?’ You’re going to say, ‘This is what we want’.