House Democrats have announced that they are moving forward with plans to impeach Donald Trump for the second time, after a violent insurrection in his name at the Capitol on Jan. 6.

House Speaker Nancy Pelosi announced on January 11 that Democrats are looking to impeach President Donald Trump for “incitement of insurrection.” This is the first time in United States history that a sitting president would be impeached twice. The introduction of the impeachment papers comes five days after pro-Trump insurgents stormed the Capitol with a joint session of Congress inside to protest Joe Biden‘s certification as president-elect.

The single article of impeachment reads: “President Trump gravely endangered the security of the United States and its institutions of Government. He threatened the integrity of the democratic system, interfered with the peaceful transition of power, and imperiled a coequal branch of Government. He thereby betrayed his trust as President, to the manifest injury of the people of the United States.” The resolution also cites the 14th Amendment, which “prohibits any person who has ‘engaged in insurrection or rebellion against’ the United States” from ever holding office again.

Two hundred members of Congress said in the wake of the riot that they supported removing Trump from office by invoking the 25th Amendment. Pelosi stated that if Vice President Mike Pence doesn’t invoke the 25th Amendment within 24 hours, Democrats will take the impeachment vote to the House floor. “The president of the United States incited an armed insurrection against America,” she said in a previous speech. “Any day can be a horror show for America” with Trump still in office, she added.

Rioters overtook the Capitol on January 6 after Trump gave a speech to an agitated crowd of hundreds, telling them, “We will never concede. You don’t concede when there’s theft. This year, they rigged an election. They rigged it like they’ve never rigged an election before.” The crowd marched to Capitol Hill, chanting “bullsh*t!” and waving Trump banners and Confederate flags. Inside, after busting through barriers and lines of Capitol police, they smashed windows, breached both chambers, and made off with computers from lawmakers’ offices. Four people died, including a police officer. 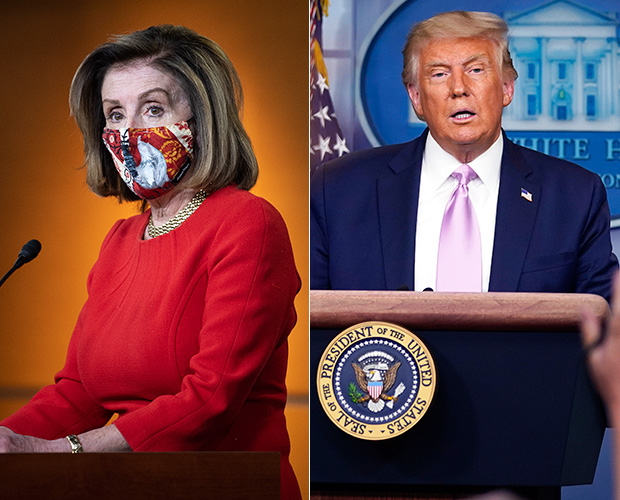 In a letter to House members on January 8, Pelosi called Trump’s actions and unwillingness to condemn the rioters a “horrific assault on our democracy.” Pelosi also said that she spoke with General Mark Milley, the Chairman of the Joint Chiefs of Staff, to “discuss available precautions for preventing an unstable president from initiating military hostilities or accessing the launch codes and ordering a nuclear strike.”