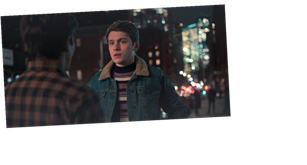 *This article contains spoilers from the first season of Love, Victor*

When Love, Simon first premiered in theaters back in 2018, fans fell in love with Nick Robinson’s portrayal of Simon Spier as he attempts to find an epic love while also coming to terms with being an openly gay teenager. Simon’s story eventually comes full circle in Hulu’s TV spinoff Love, Victor, where he becomes a guru of sorts to Victor Salazar (Michael Cimino) as he struggles with the same scenario. Through a series of DMs, the boys develop a camaraderie, and the series serves as a place for Robinson to reprise his movie role via expertly placed voiceovers.

Throughout the series, it seems like hearing Simon’s voice is the only easter egg fans would get from the original story. But come the eighth episode, after Victor finds himself in New York to experience life outside of his teenage bubble in Atlanta, viewers get a last-minute surprise that no one saw coming. Instead of the expected voiceover, Robinson suddenly appears, reprising his film role and giving loving yet much-needed advice to the young titular lead.

“You’re not a stranger—you’re one of us,” he tells Victor in a heartwarming speech. “To me, that’s the best part of this, having a community… On some level, we’ve all been through the same thing, because we’re family.” Although Simon’s appearance is brief, it’s what Victor needs to finally accept himself and come out to his loved ones by the end of the season.

So how did the producers—and Robinson, for that matter—find a way to sneak Simon into the show without anyone suspecting his involvement? It turns out, it wasn’t that difficult, as the actor wanted in on the show.

“Nick Robinson was very excited to be part of this,” co-executive producer Elizabeth Berger (she shares the title with Isaac Aptaker) told Entertainment Tonight about the cameo. “The three of us were very much in agreement that this would be Victor’s story, so for the most part, the voiceover was the perfect level for Simon.”

“That being said,” she continued, “it felt like it would be disappointing to us, both as the creators and to fans, to not see him at some point.” Hence came a brilliant idea: bring Robinson (who also serves as a producer for the show) in for an episode, and have Simon and Victor meet face-to-face.


But with that came a slight hiccup. Robinson was nowhere near Los Angeles, where the show filmed at the end of 2019; he was busy working in New York, starring in To Kill a Mockingbird on Broadway. This led to a relatively simple solution: bring Cimino out to New York for the big moment, coinciding with the show’s last day of filming.

“Michael was just so, so excited to meet Nick,” Aptaker told Entertainment Tonight about the pair. “He felt like he was taking a passing of the torch, and he was just buzzing the whole day.”

“[Robinson] is so freakin’ cool,” Cimino told Entertainment Weekly about meeting his film counterpart. “When we actually first met in New York, we just talked and got food beforehand, and I totally geeked out and acted like a fool. But Nick was totally understanding and totally sweet to me.”

And to bring the moment to full fruition, Simon gives his jean jacket from the film to Victor (“a little something to remember your weekend in the city”), further cementing their bond—and maybe a potential meet up once again, should Hulu greenlight a second season.