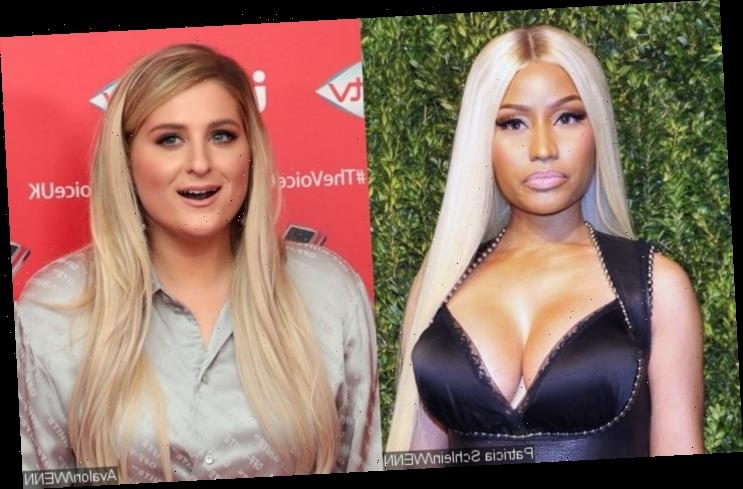 Many are convinced that the ‘snakes’ the Young Money artist is referring to on the song are her longtime managers Gee Roberson and Cortez Bryant, with whom she parted ways last year.

AceShowbiz -Fans of Nicki Minaj are celebrating after the lack of hearing new music from the rapper. The Young Money artist has joined forces with Meghan Trainor for a new song titled “Nice to Meet Ya”, which made its way out on Thursday, January 30.

Nicki’s verse comes towards the end of the song, featuring her seemingly taking shots at her former management team. “Had to cut the grass, it was snakes in the camp/ They know I’m the billy, I be laughin’,” she raps. “One minute, I’m nice, the next, a monster/ My guest-house alone cost like three tickets.”

Nicki parted ways with Gee Roberson, Cortez Bryant and Blueprint/Maverick Management back in April 2019. While neither parties revealed the reason for the split, there were rumors going around that her management team caused a lot of drama in the days leading up to the split.

“Nice to Meet Ya” is included in Meghan’s third studio album “Treat Myself”, which was released on the same day as the song’s release. The album was supposed to be released on August 31, 2018, but was delayed due to Meghan wanting to add more songs. She said of the delay at the time, “I’m in such an amazing place and I can’t stop writing songs… I’ve decided to move my new album ‘Treat Myself’ until I get everything out of my head and recorded in the studio.”

While fans had to wait until the release of her third album, Meghan treated them to her EP, “The Love Train”, which she described as the predecessor to “Treat Myself”. Released on February 11, 2019, the record consisted of six tracks and was inspired by her marriage to Daryl Sabara. It debuted at No. 10 on the U.S. Digital Albums chart and No. 37 on Top Album Sales.