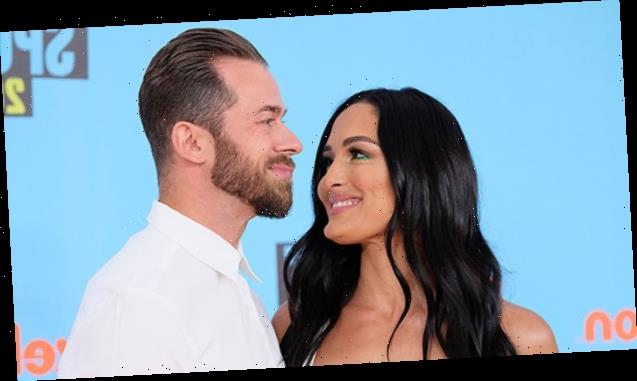 Nikki Bella once offered Artem Chigvintsev the chance to ‘walk away’ from their relationship. She revealed why, and Artem’s response, on the May 27 episode of ‘The Bellas Podcast.’

Artem Chigvintsev didn’t exactly arrive in Nikki Bella’s life at ideal timing, which scared her at first. The retired WWE star revealed that she once gave her dance partner-turned-lover the option to leave their relationship during the May 27 episode of The Bellas Podcast, which she co-hosts with her twin sister Brie Bella. “There were certain things I was struggling with because I was still in the process of healing, but yet I was falling in love so fast with this man,” Nikki said on the podcast. “I had that conversation with Artem. I told him, ‘Look, I have good days and I have bad days and I am trying to heal, but I don’t want to lose you. But if you want to put up with what I’m going through and stay by my side, do it.”

Nikki then offered Artem an out. She recalled telling him, “But if you want to walk away and we come back to this relationship down the road, I 100 percent understand.” As you know, Artem — who’s now expecting his first child with Nikki — didn’t take her up on that offer. “Look, I know you’re going through stuff. You’re healing. I want to be here to support you,” he told Nikki, according to her recollection. Noting how much they’ve progressed since first sparking dating rumors in Jan. 2019, Nikki added, “People don’t know the conversations Artem and I have had, which has helped make us be so strong.”

Nikki defended her choice to fight her initial fears and dive into a serious relationship, soon after ending her engagement with fellow WWE star John Cena in July of 2018. “I feel like it’s hard for someone to understand if they’ve never fallen in love fast. Because it doesn’t happen with everyone, you know what I mean?” Nikki explained on Wednesday’s podcast. “Some relationships, it takes a little bit to fall in love with that person — which is normal and OK — and sometimes you fall in love the minute you see someone or after the first date. That’s OK too. If you’ve been in that situation, you become wishy-washy because you’re fighting so many emotions.”

I love cutoffs 🤤 lol @theartemc If you missed #totalbellas last Thursday head to the @eentertainment On Demand App, your DVRs or @hulu 💋👯‍♀️✨🥂

Despite Nikki and Artem’s ups and downs that have been documented on the E! series Total Bellas (Nikki even joked about being “Team Artem” this season), the lovers are excited to welcome their first baby together after breaking the pregnancy news in Jan. 2020. In an amazing coincidence, it turned out that Nikki’s twin sister Brie was pregnant as well!

“[Artem and I are] really excited for the gender reveal for the season finale of Total Bellas, so it’ll be fun to see what people think,” Nikki EXCLUSIVELY told HollywoodLife in May. “I have to find something that goes with a Russian middle name and last name. So it’s very, very difficult, and I don’t want it to be a Russian first name.”