Nothing banishes the winter blues – and dreary browns – like irises

Irises to the rescue! Nothing banishes the winter blues – and dreary browns – like irises, the colourful saviours of early spring, says Monty Don

Spring – and especially early spring, which nowadays in our climatically changing world comes to my garden in February – is not awash with colour. We think it is, but in fact your garden and mine are mostly still dominated by the brown of deciduous hedges, trees and shrubs and lots of bare soil.

The flowers that there are – snowdrops, primroses, crocus, perhaps early daffodils – are a joy, brightening the darkest day and to be treasured. Yet the overall effect is still of bright points of soft colour in a gardenscape yet to truly awake.

But early irises break that rule.

They fairly explode with colour. You can get exquisite, small, jewel-like flowers in softer shades – I have Iris reticulata ‘Katharine Hodgkin’, which has petals washed a pale blue that is delicate and lovely. 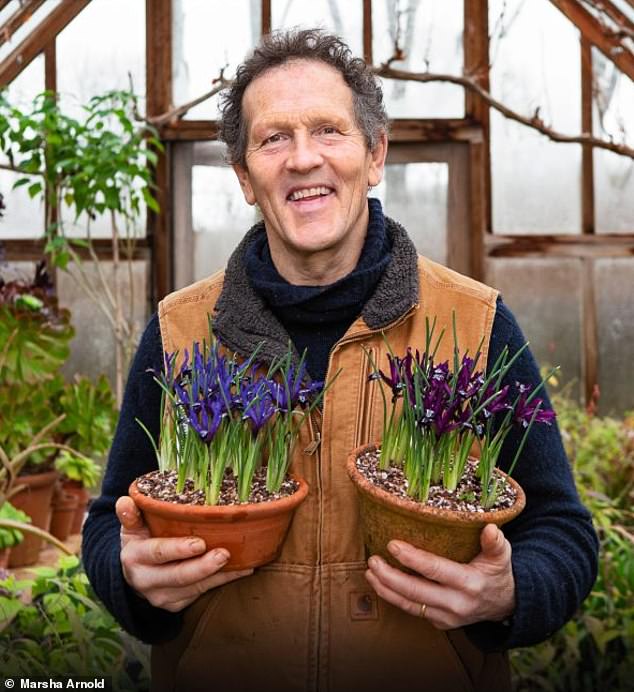 Monty Don says Irises rescue us from a dreary winter when they arrive in February during early Spring. Pictured: Monty with irises ‘Blue Note’ (left) and ‘Pauline’

But in reality it is the vibrancy of the deep blues and purples that transform the garden right now. Nothing else holds a candle to the sheer intensity of their display.

The first to flower for me (and flowering of all my spring bulbs has been noticeably late this year – down, I suspect, to an exceptionally dry autumn and winter) were the deep purple of ‘Pauline’, with its white speckled lower petal, and the not-very-blue ‘Blue Note’.

Q The lawn under our magnolia, which is now 6m high with a spread of 9m, has turned into mud. Is there any point in reseeding the ground?

A To thrive grass needs light, water and good drainage – this tree will shade most of the light and take most of the available moisture; and compaction will worsen the drainage, hence the mud. I suggest creating a bed around the tree, which will fare much better with a wide circle of mulch round it. Plant with things that like dry shade such as cyclamens, ferns or spring bulbs.

Q Why have my attempts to grow buddleia in my fertile garden failed, when sites nearby have healthy plants that bloom?

A Buddleias do best on poor but well-drained soil, so your ‘fertile’ garden is a bad place to start. Prune them back very hard this month, and new growth will bear this year’s flowers.

Q Slugs are eating all the young plants in my greenhouse, especially dahlias and courgettes. Any advice?

A Slugs like damp, dark places, like the underside of pots, so regularly lift them up and pick off the slugs. Water in the morning only so you don’t have damp conditions overnight when slugs come out to feed. And raise pots so they drain fully and there’s air beneath them.

This is the first time I have grown the latter and I like it a lot, although I would describe it as a purple on the blueish end of the scale, whereas ‘Pauline’ is a purple with more red in it. But that is a quibble. They are both life-enhancing.

For a true blue, however – and remember that blue is by far the rarest colour in the garden at any time of year – I would opt for Iris histrioides ‘Lady Beatrix Stanley’, which has lovely blue flowers with yellow markings in the centre of the petals, carried on a short stem.

I. histrioides ‘Harmony’ is another favourite that is distinctly blue, and ‘Clairette’ is a very pure, pale, almost icy shade of blue. Unlike some of these early irises, all cultivars of I. histrioides flower strongly year after year and I have some, like ‘George’ and ‘Lady Beatrix Stanley’, that have reliably returned in full vigour for ten years now.

By mid-March these irises are coming to the end of their flowering season (although ‘JS Dijt’, which has rich burgundy petals, flowers later, so extends the display).

As with all flowering bulbs, it is important to allow the foliage to die back in its own good time, exposing it to as much sunshine as possible. This enriches next year’s bulbs, and the failure of bulbs to flower is as likely to be damage to their post-flowering foliage, deliberate or otherwise, as any other cause.

These early irises are completely hardy – I’ve often had the pots I grow them in frozen solid with frost for days on end. They hate being too wet though, which is why I grow them in pots rather than in a border. I mix a potting compost that’s half grit and half peat-free compost. This may seem absurdly gritty, but they thrive in it.

I plant them any time between the beginning of September and the end of November. They can be left outside as long as they do not get too wet, but I put mine in a glass frame that acts like an umbrella, open to the cold weather but shielded from the wet.

The shoots appear around Christmas, and as soon as buds appear I bring a few pots into a greenhouse to force them to flower a little early so we can have an early display, although none of that is really necessary. These are, by and large, hardy little flowers that will grow in grass, a border or an exposed window box as long as they have good drainage. 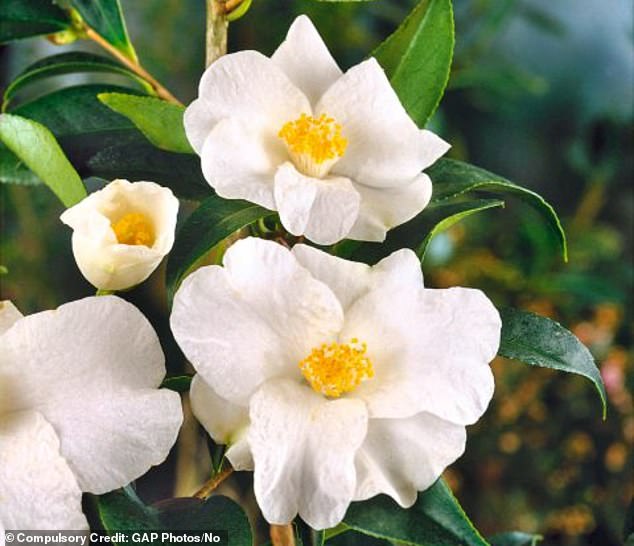 Monty’s plant of the week is the Camellia Cornish Snow, with its single white flower carried on a fairly loose shrub and reaches an airy 4m in height

My soil is too alkaline for camellias but I grow the marvellous ‘Cornish Snow’ in a large pot, using an ericaceous potting compost made from composted bracken and leaf mould. At this time of year it has a mass of small, single white flowers carried on a fairly loose shrub, which will reach an airy 4m high.

As with all camellias, early morning sun after a frosty night will ruin the flowers, so the shelter of a west-facing wall or fence is ideal. For best spring flowering, don’t let it dry out in late summer and autumn when buds are formed.

Mulching your flower borders now will keep the soil warmer, help retain moisture and suppress weeds. Mulch should be at least 5cm deep and any organic material will do, including well- rotted manure, chipped bark and composted bracken.