Of All The Bachelor Series, This One Stands Above The Rest

In the years since “The Bachelor” debuted, viewers have seen spinoff shows come and go. Dozens of couples seemingly found love, but only a small percentage of them eventually married. Fans have their favorite “Bachelor Nation” shows, but some would argue one stands above the rest.

While the first star of “The Bachelor,” Alex Michel, didn’t propose, his runner-up, Trista Rehn, met her Mr. Right as she led the first season of “The Bachelorette.” Trista and her pick, Ryan Sutter, married in 2003 and remain a fan-favorite couple. “The Bachelorette” has given fans plenty to celebrate over the years, with Desiree Hartsock and Rachel Lindsay both marrying their picks, and JoJo Fletcher set to marry Jordan Rodgers. In addition, Ashley Hebert married J.P. Rosenbaum, although they have since divorced.

“The Bachelor” may be the franchise “OG,” but its track record is pretty dismal. Sean Lowe is the only guy who married his pick, Catherine Giudici. Granted, Jason Mesnick and Arie Luyendyk, Jr. get honorable mentions, as they both married their runner-up ladies. The long-gone “Bachelor Pad” brought together Blake Julian and Holly Durst, but no such luck with “Bachelor: Listen to Your Heart” (per ScreenRant). The same could be said for “The Bachelor Winter Games,” although People noted that contestants Courtney Dober and Lily McManus lasted a while. “Bachelor in Paradise” has produced some marriages, although there are plenty of veterans who try again and again with no luck (we see you, Chris Bukowski).

Bachelor in Paradise is more than just a massive party 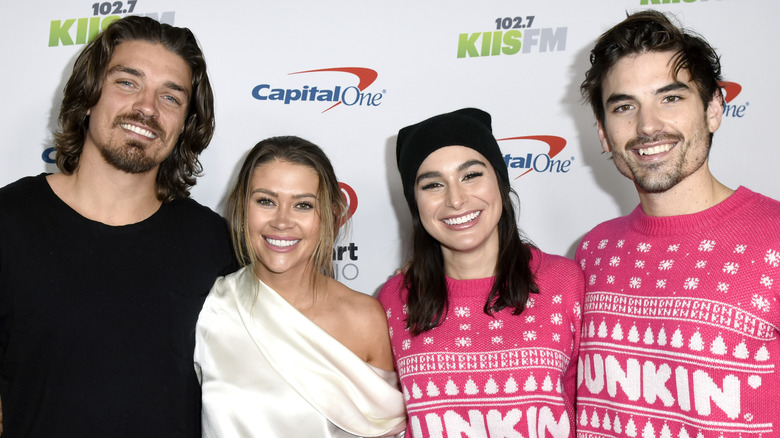 “Bachelor in Paradise” may seem like a big party, but as NYC Tastemakers detailed, some could argue it’s the best show of “The Bachelor” franchise. There’s drinking and drama, but contestants spend tons of time together. In the long run, that plays an enormous role in creating lasting romances.

Jade Roper and Tanner Tolbert appeared on Season 2 of “Bachelor in Paradise” and were practically inseparable during filming. As People detailed, they married in 2016 and have three children. During their beach proposal, Tanner admitted he “didn’t have any expectations about meeting somebody or falling in love with somebody” on “BIP.” However, he admitted to her, “I’ve never met anybody who makes me feel the way I feel with you” (per Life & Style).

Some “BIP” couples, like Carly Waddell and Evan Bass or Chris Randone and Krystal Nielson, married and split. However, plenty of others can credit “Bachelor in Paradise” for helping them find their soulmates. Insider noted that Hannah Godwin and Dylan Barbour remain engaged, and Raven Gates and Adam Gottschalk recently got married. In addition, Caelynn Miller-Keyes and Dean Unglert became homeowners together (per Instagram). Ashley Iaconetti and Jared Haibon wed and they’re expecting a baby (per Instagram), and the baby news applies to Astrid Loch and Kevin Wendt too, per People. Even the harshest “Bachelor in Paradise” critics would likely acknowledge the show’s success in creating lasting love when compared to its franchise siblings.