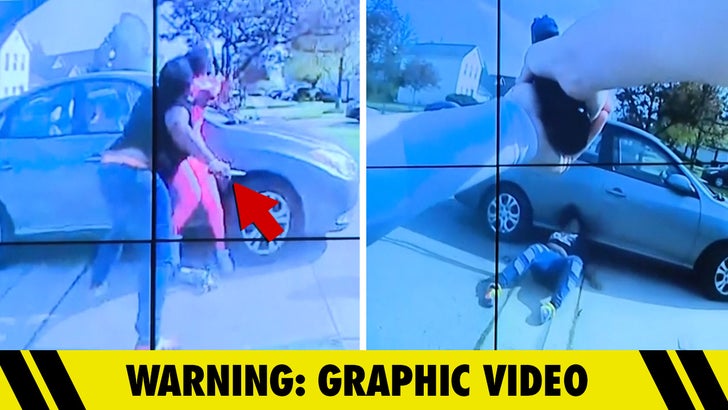 Ma’Khia Bryant, a 16-year-old from Columbus, OH, is dead after a cop shot her 4 times … and newly released body cam shows why police were called, and why the incident’s sparked new protests over another police-involved fatality.

The incident went down Tuesday — about a half-hour before Derek Chauvin‘s guilty verdicts — when police responded to a call for a fight between a few teenage girls … one of them being Ma’Khia. The body cam shows a chaotic scene when cops arrived in the driveway of a home.

One girl was thrown to the ground at the feet of one of the officers, and you hear him yelling, “Hey, hey, hey, hey. Get down!” as Ma’Khia’s seen apparently lunging with a knife at a different girl.

You see the officer quickly draw his gun and then fire 4 shots at Ma’Khia, who immediately falls to the ground. You can see a man standing nearby yell at the cop in shock, “You didn’t have to shoot her. She’s just a kid, man.”

The cop responded, “She had a knife. She just went at her.”

The shooting prompted protests near the scene of the incident, and in downtown Columbus. The officer’s reportedly been taken off the streets while the Ohio Bureau of Criminal Investigation investigates.

Ma’Khia was reportedly taken to Mount Carmel East Hospital where she was pronounced dead. Neighbors say she was living in a foster home on the block where she was shot.

Columbus Mayor Andrew Ginther called it a tragic day and added, “We felt transparency in sharing this footage, as incomplete as it is at this time, was critical.”