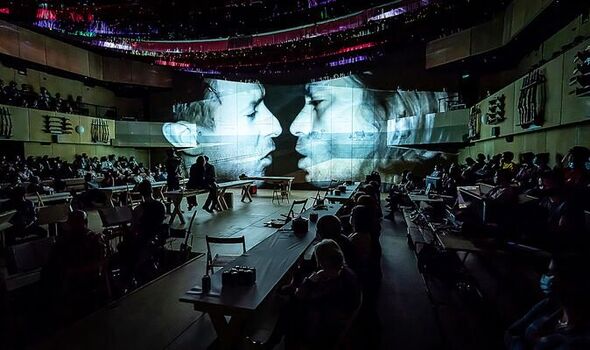 As the love triangle between cocky rodeo hero Curly (Arthur Darvill), fiery-spirited Laurey (Anoushka Lucas) and brooding hired hand Jud Fry (Patrick Vaill) plays out there is a sense of impending catastrophe that is closer to Greek tragedy than Broadway blockbuster.

The air is heady with sexual tension from the opening and Darvill delivers Oh What A Beautiful Mornin’ with an antagonistic, challenging edge that sets the tone for the show.

As the rambunctious Ado Annie Carnes, Marisha Wallace sings I Cain’t Say No in two modes – first mischievously funny before picking up a microphone and raising the roof in a hollering, snarling rock vocal accompanied by stomping boots.

Throughout the first half, Jud sits quietly observing, the pale blue eyes in his haunted, impassive face the only indicators of his obsessive thoughts. There are fine performances throughout (Stetsons off to Liza Sadovy, Ali Hakim and James Davis) but Vaill is the key to its success.

He’s been with the show since its origins in drama school and it shows.

When the lights go out and a huge video screen projects the faces of the two love rivals for Pore Jud is Daid during which Curly urges Jud towards suicide we are witnessing a spectacularly cruel process of psychological dismantling.

The lengthy dream sequence designed to convey Laurey’s fevered indecision is performed with fluid beauty by solo dancer Marie-Astrid Mence to the distorted howl of an electric guitar.

Everyone involved including co-director Jordan Fein, choreographer John Heginbotham and musical arranger Daniel Kluger honour the original by emphasising the visceral conflicts behind the corn fed story and repositioning it as musical noir.