Stacey Solomon, 32, and Joe Swash, 40, said “I do” on Friday in a ceremony held at their Essex home, Pickle Cottage. Many of their celebrity pals were invited to the anticipated event, including The Only Way Is Essex stars Ricky Rayment, 31, and James ‘Arg’ Argent, 34.

However, it appears not everyone was able to make it as Stacey’s Loose Women co-star Linda Robson disclosed that she was the only one who attended.

She explained: “There was only me, Tom and Sally – the bosses from Loose Women that went.”

Nadia Sawalha, 57, was away and Kaye Adams, 59, was also unavailable.

The event which had been planned for a year, unfortunately, saw most of Stacey’s colleagues unable to fit the big day into their busy schedule. 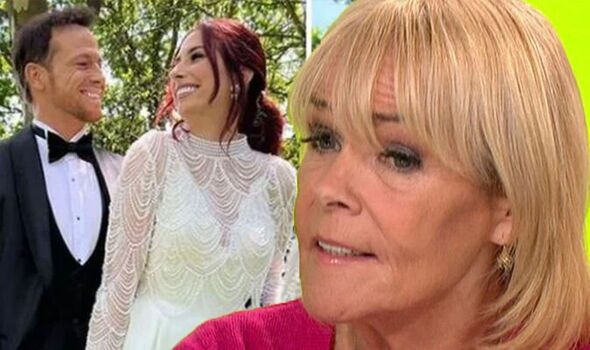 Sharing further details about the stunning garden ceremony, Linda said it was very “moving” and many of the guests spent the day “crying”.

“There were many best men. The speeches went on a little long.

“So it was two of Joe’s best mates and all his sons and that. The kids were all page boys and bridesmaids,” she told OK! magazine.

Linda said the wedding turned into a party, which lasted until midnight as she added: “It was an amazing day. We didn’t get out there until about 12 o’clock that night.”

Speaking of the ceremony itself, Linda said everyone, including the happy couple, cried, especially after Joe’s mum Kiffy walked him down the aisle in place of his late father Ricky.

Ricky died at the age of 39, when Joe was just 11 years old, from an undiagnosed heart condition called Sudden Arrhythmic Death Syndrome (SADS).

“It was very moving because Joe’s mum walked him up the aisle because he lost his dad a long time ago,” Linda explained. “And we’re really close with the Swash family – they live opposite me.”

Sharing some official photographs from their big day on Instagram, Stacey referenced their loved ones who sadly couldn’t be there, in particular Joe’s father.

In a lengthy caption, the mother-of-four wrote: “Forever. Me and My Husband. I don’t think I will ever get used to saying that. It all feels like a dream “You know you’re in love when you don’t want to fall asleep because reality is finally better than your dreams.” Dr. Seuss.

The most special day that we didn’t ever want to end. We love you all & the special community we’ve built on here so so much and couldn’t wait to share these moments with you.”

She then added: “Joe lost his father at the age of 11 and so did my dad. A huge part of our wedding day was reflecting on how this had a huge effect on them and how hard it is, even to this day to deal with.

“We have copyrighted all these photos. We ask for all media who wish to use them on their own platforms to lawfully do the right thing by asking permission from the photographer.

“They will, in turn, give permission for them to be used as long as the media outlets using them make a donation to a charity that supports bereaved children.”

Stacey finished by telling her 5.3 million followers: “These memories are so special to us and it would mean the absolute world to us if they made a difference to children growing up with the loss and heartache that my father and my husband did. Thank you for respecting our wishes, lots of love Mr & Mrs Solomon-Swash.”

A couple of years ago, Stacey revealed that Joe had struggled following their son Rex’s birth when he was hit by the trauma of losing his own father when he was just 11-years-old.

Joe’s dad was a London cab driver and passed away suddenly when his son was still at school.