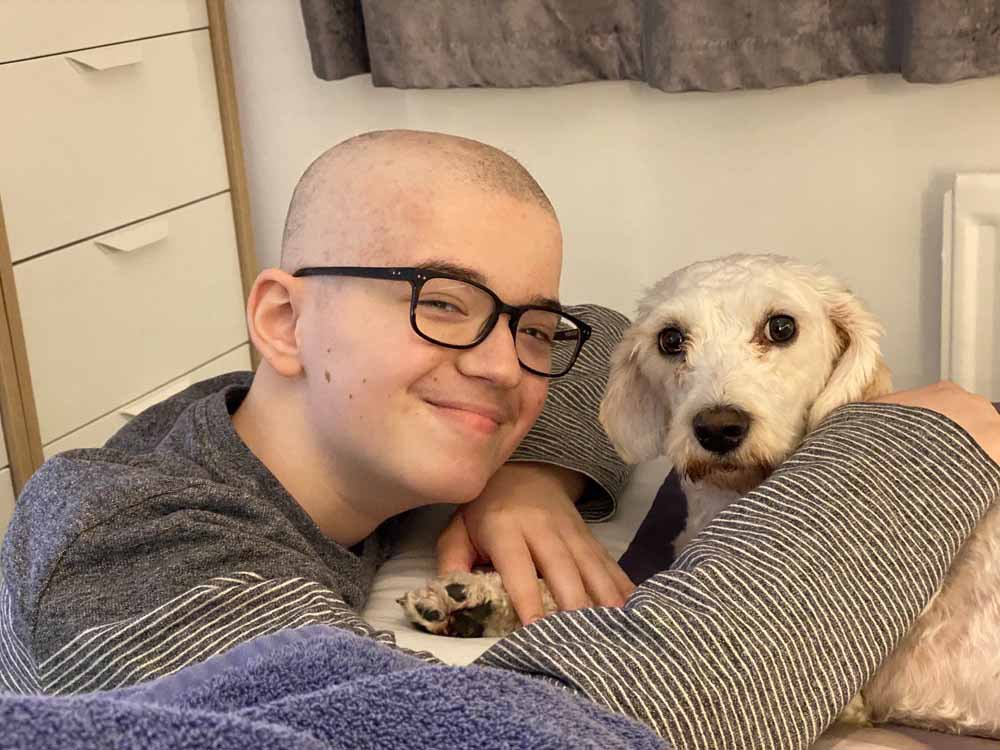 A mum has praised her family’s optician, after they spotted a potentially life-threatening tumour in her son during a routine appointment.

Nurse Sophie Huggett, 48, says her son Daniel, 13, had lost interest in reading – a hobby he loves – and could not remember what he had been taught in online classes, making her think he was not paying attention.

But when the optician took action after spotting his swollen optic nerves, they decided he should be rushed to A&E.

Sophie, now a stay-at-home mum, was then devastated when doctors discovered a massive spinal fluid build-up inside his skull and a ‘jagged, tree-like’ 4cm tumour wrapped around his brain stem.

Sophie, of Stonecross, Eastbourne, East Sussex, said ‘If I hadn’t taken him to see the optician when I did the surgeon said Daniel wouldn’t be here now.

‘We have a lot to thank the optician for.’

Daniel, who lived with his mum, brother Matthew, 12, and dad Andrew, 52, first started having strange symptoms, like unsteadiness on his feet and shaky hands, in the summer of 2020.

He was prescribed migraine tablets by his doctor at the same time, so his parents did not realise the full magnitude of what was happening.

Sophie said: ‘He was always laughing it off, so I didn’t really think about it.’

His parents were more concerned by his sudden lack of interest in reading.

‘He’s a bright young man and I thought it was odd because he always really loved reading,’ Sophie recalled.

‘He would lie in bed at night reading and come down and tell us all what had happened in the book in the morning.

‘But, from about December, when I asked him he’d say, “I’m having trouble remembering what happened at the beginning.” 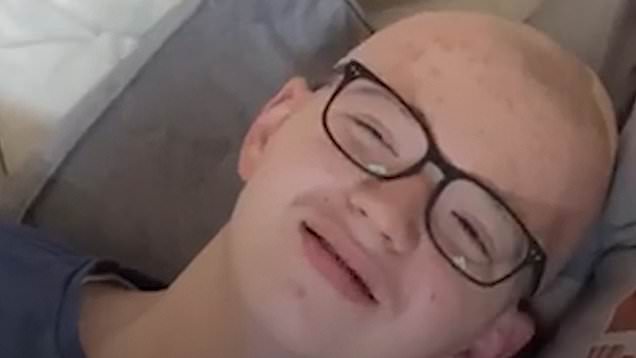 ‘After that, he lost interest in things more and more. He couldn’t remember his history lessons from the previous week.’

Sophie assumed Daniel wasn’t paying attention, but booked him an eye test in December after also spotting him squinting at the television.

While at the Specsavers store, the optician asked whether he had recently had a head injury.

‘Being medically trained, that was the moment my blood ran cold,’ said Sophie.

The optician had found Daniel’s optic nerve behind both eyes to be ‘completely’ swollen and advised his worried mum to take him straight to A&E at Eastbourne District General Hospital – even writing an urgent letter for Sophie to hand in at the A&E desk, and sharing his personal mobile phone number in case they were not seen immediately.

A CT scan at the hospital revealed a large lump ‘right in the centre of his brain,’ after which he was blue-lighted to London’s more specialist King’s College Hospital.

‘Daniel and I didn’t want to shut the ambulance door and drive off when we said goodbye to his dad and brother, as we were all crying so much,’ Sophie said.

An MRI scan revealed Daniel had severe hydrocephalus – a build-up of spinal fluid on the brain – as the growth was blocking the liquid’s drainage path.

From there, surgery followed, taking 12 hours to retrieve a sample from inside the boy’s brain for a biopsy.

Sadly, five days after the operation, his family were told he had a rare, large pineal germ cell brain tumour – these, as in Daniel’s case, are normally malignant – which had adhered to his brain stem.

The next stage for Daniel was chemotherapy, which left him ill and on morphine, but again this was another source of bad news.

The tumour did not shrink and instead began to calcify ‘like bone’ and infiltrate his brain stem, making it one of the most complex cases in the chief medic’s 30-year career, according to Sophie.

Daniel’s ordeal was far from over, having to endure further emergency surgery and experiencing painful muscle spasms and seizures on the operating table.

The brave teenager even had to be place into an induced coma for three weeks to improve his chances of survival.

Sophie said: ‘I felt really impotent. At one point during this nightmare, he developed sepsis – a potentially deadly reaction to infection – and he had a chest infection.’

Brought out of his coma at the beginning of June, he was transferred to the neurological rehab ward at King’s at the end of the month.

Yet more bad news followed when Daniel’s oncologist told the family the same month that his cancer had spread to the base of his spine.

Fortunately, he was eligible for pioneering proton beam therapy – a course of radiotherapy that does not kill the surrounding cells – at specialist cancer centre The Christie Hospital in Manchester.

He will begin a six week treatment course when he has fully recovered from brain surgery later this year.

Thankfully, Daniel is on a ‘cure pathway’, meaning he should recover, but it will likely take time.

The family are now using GoFundMe to raise money to adapt their hous, so Daniel can, hopefully, continue his recovery at home.

And Sophie, who is writing a blog about his progress, said: ‘His rehab is going to be such a long and difficult journey, but I want him here to do it with me at home – to sleep in his own bed and cuddle up with his dogs, cockapoos Bella, six, and Angel, two, who miss him so much and probably think he’s never coming back.’