Ozzy Osbourne confirms he has Parkinson’s disease in emotional interview 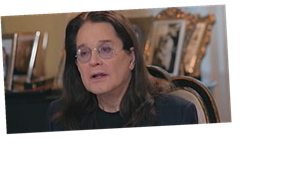 Ozzy Osbourne revealed on Good Morning America that he has got Parkinson's, and can't hide the disease any longer as the symptoms are developing.

Ozzy, 71, said it began when he suffered a fall last year and had surgery for it.

Sharon fought back tears as she said she has had to stay strong for their entire family.

He said on the US show: "It has been terribly challenging for us.

"I had to have surgery on my neck which screwed all my nerves. I found out that I have a mild form of….' he said before looking to his wife to finish his sentence.

"It's not a death sentence by any stretch of the imagination but it does effect the nerves in your body. It's like you'll have a good day, then a good day and then a really bad day.'

Ozzy continued: "A year ago I was in a terrible state. I'm on a host of medication, mainly for the surgery.

"I've got numbness down this arm and my legs are going cold. I don't know if it's the Parkinson's or what. That's the problem."

The couple have revealed that they have explored all of their medical options in the US, and will now travel to Switzerland to speak to a specialist.

Ozzy also spoke about the guilt he felt from hiding his illness from the public, as he said: "To hide something is hard – you never feel proper. You feel guilty. I'm no good with secrets. I cannot walk around with it anymore. It's like I'm running out of excuses.

Ozzy gradually started to feel symptoms after falling in the bathroom of his home last April, forcing him to cancel his world tour.

Talking about why he didn't seek help sooner, he said: "It wasn’t really a problem for a while. I never noticed any different. Sharon was saying, 'Are you okay? You seem different.'

"The pain is constant. The first six months I was in agony. I'd say, 'Sharon – you're not telling me the truth. I'm dying, aren't I?'

"I thought I'd got some terminal illness because the improvement was so slow.'"