Sitting in a sterile space surrounded by neutral tones, beige fabrics and timber finishes, Prince Harry’s reflection on his battle with mental illness will no doubt dominate media coverage of the new documentary series The Me You Can’t See.

The series, a collaboration between Harry, Britain’s prince-in-exile and American television’s confessor-in-chief Oprah Winfrey, ambitiously attempts to unpack the complexity of mental illness by drawing once-whispered conversations into the open. 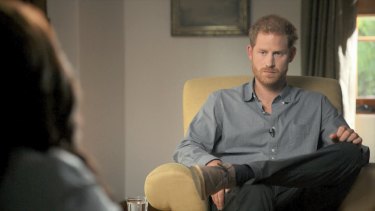 “It was a puzzling life,” Prince Harry says of life in the Royal Family.Credit:Apple TV+

And while it examines a number of subjects, the first one is undoubtedly its highest profile, and Harry’s reflections on royal life, and his grief in the wake of his mother’s death in 1997, is both electrifying and illuminating.

“It was a puzzling life,” Harry says of life in the Royal Family. “When I think about my mum, the first thing that comes to mind is always the same one, over and over again: strapped in the car, seatbelt across, with my brother in the car as well, and my mother driving, being chased by three, four five, mopeds, with paparazzi on.

“And she was almost unable to drive because of the tears,” Harry continues. “There was no protection. One of the feelings that comes up with me all the time is the helplessness. Being too young, being a guy, but too young to help a woman, in this case your mother. And that happened every single day. Every single day until the day she died.”

Newly-emancipated, Harry is on a mission “to heal myself from the past,” he tells Winfrey in the opening episode, Say It Out Loud.

That’s a process that has included four years of therapy, he says, and now a space on Winfrey’s metaphorical couch. “I wasn’t in an environment [in the Royal Family] where it was encouraged to talk about it, either,” Harry says. “That was sort of squashed.”

And it comes as an internal BBC investigation into journalist Martin Bashir’s interview with Harry’s mother, the late Princess of Wales, revealed Bashir gained Diana’s trust with faked documents which suggested her family’s staff were selling stories to other media outlets. (Harry’s brother Prince William on Friday said the interview, which “played on her fears and fuelled her paranoia”, should never be re-broadcast.)

During their conversation, Harry opens up about how broken he felt inside prior to his break with his family. And how he passed himself off as just getting by for many years. “Never happy, never sad, just fine, fine was the easy answer,” he says. “But I was just all over the place mentally.”

The 36-year-old prince, who is sixth in the line of succession to the British throne, described his daily life at that time as “fight or flight mode, panic attacks [and] severe anxiety.” 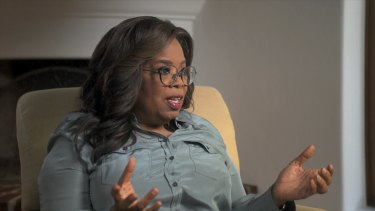 America’s confessor-in-chief Oprah Winfrey in the Apple TV+ documentary The Me You Can’t See.Credit:Apple TV+

It’s hard to watch The Me You Can’t See and avoid its intersection with the recent Oprah with Meghan and Harry, and even Oprah’s recent interview with Ellen Degeneres. In both of those cases there was an inescapable sense that an image was being managed: reshaping Meghan Markle’s narrative from agitator to victim, or for Degeneres, drawing focus away from the troubling workplace culture she oversaw.

The Me You Can’t See is less polished, despite the down-to-the-placement-of-the-cushions sense you get from Winfrey’s talk with Harry, and because of it far more effective. This feels more clinical. Unsurprising given it feels like we’re eavesdropping on an appointment with Dr Winfrey. As it progresses other narratives are folded in: some famous, such as Lady Gaga and Glenn Close, and some less famous, such as Olympic boxer Ginny Fuchs and chef Rashad Armstead.

This will also, inescapably, be seen in the context of Harry’s appearance on Dax Shephard’s Armchair Expert podcast in which he compared Royal life to “living in a zoo”. And at some point, to be fair to those unable to speak in reply, there is a risk that “saying it out loud” turns into playing a relentless, one-sided blame game.

What is distinct here, though, is the audience’s sense of Harry’s rage, which seems at times to be simmering barely beneath the surface, despite the serenity of his manner, and the anodyne, almost antiseptic, interview setting. It is visceral. In Winfrey’s other confessionals-packaged-for-TV it was easy to regard her subjects with a sceptical eye. Here, where the pain is front and centre, not so much.

“I was so angry with what happened to [my mother], and the fact that there was no justice, at all, nothing came from that,” Harry tells Oprah. “The same people that chased her into the tunnel, photographed her dying on the back seat of that car.”

The Me You Can’t See is on Apple TV+.