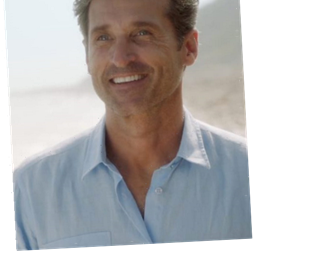 Grey’s Anatomy pulled off the impossible on Thursday night.

The long-running ABC drama teased a premiere that would include a “shocking, jaw-dropping ending.”

And then it delivered on exactly that! And more!

In the final moments of the episode, Cormac left the hospital for the evening and found Meredith … unconscious in the parking lot, seemingly on the verge of death.

In her mind, Meredith then cut to a different thought:

Reuniting with Derek on the beach.

Yes, that Derek — her husband, Derek “McDreamy” Shepherd, who died years ago. And who actually appeared in a brand new scene on the premiere!

He yelled her name and she spun around and saw him before the episode came cut to black.

Cue legitimate shocks and screams across the television-watching universe.

How on Earth did this reunion come about?

Dempsey, who appeared to have left the show on bad terms in 2016, spoke to Deadline about it.

“I came across a photo that I was going to post that had Ellen and I, and I think that produced a call where I reached out to Ellen, and this was right around, the conversation was starting for season 17,” the actor explained.

“And Ellen’s like, let’s get together, I want to go over a couple things, I want to catch up.”

So… it was just fortuitous timing?

In a sense, Dempsey continued.

“We hadn’t spoken or been together for a while. It was a great opportunity to catch up and say, okay, what can we do for all the frontline responders?

“I’ve been tracking what Grey’s had been doing with giving masks, and making sure that people had the right equipment, and it came from that place — okay, what can we do to make people feel better, to give some comfort in this time of uncertainty, and that’s how it began.

“And it was really a wonderful experience to go back, to work with [director] Debbie [Allen].”

“I think the whole atmosphere has changed, certainly working at the beach, and seeing everybody again was really a very healing process, and really rewarding, and a lot of fun.

“And hopefully, that feeling translates, and the fans enjoy it.

Dempsey even said it “really enjoyable” to get back into character as Derek.

“It was really exciting, and fun, and it was great to see everybody. …,” he said.

“The dynamic behind the camera had changed. There’s much more diversity within the crew. There was a nice balance, too, of equality that I was seeing.

“So, culturally, there was a lot of things that were different, that I thought were very positive and very inspiring, actually.”

For her part, Pompeo said she “had a ball” filming alongside Dempsey once again.

“We just have a chemistry and a dynamic that’s always served us well, and I think we have a genuine affection for each other,” she told Deadline.

“It was very healing to come back, and know that we’re doing something good, putting out a positive story, a healing story, going to make people smile.”

As you can see in the preview above, this wasn’t a one-off for Dempsey.

He and Pompeo (who were both tested for Coronavirus prior to shooting) will interact next Thursday on air as well.

“It’s crazy how much time has passed, but it really was so comforting, and lovely, and inspiring to go back, and to work together, to see everybody,” Dempsey concluded.

“[We’re] in a pandemic, and all the lives that have been lost. Where are these souls going?

“And I think that’s what attracted me to this storyline, I think it can be really helpful and healing to so many people.”