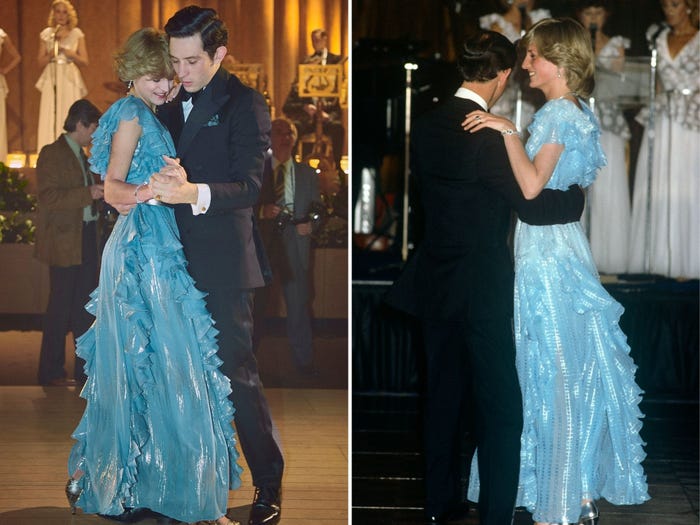 "Uneasy, even glum" is how a news report described Princess Diana when she arrived in Alice Springs, Australia, for her first-ever overseas tour with Prince Charles.

For Diana, only 21 years old and just two years into her marriage with Prince Charles, the highly public tour was a "terrifying baptism of fire," Diana's confidant and biographer Andrew Morton wrote for the New York Post in 2017.

But by the end of the tour four weeks later, Diana had solidified her reputation as the "people's princess," charming her way into the hearts of Australians at a time when the monarchy was looking to repair public opinion in the Commonwealth.

The tour is a central focus of season four of Netflix's "The Crown." Released on November 15, the newest season depicts the lives of the British monarchy from 1979 through 1990.

Here's how the real-life tour happened and a look back in photos. 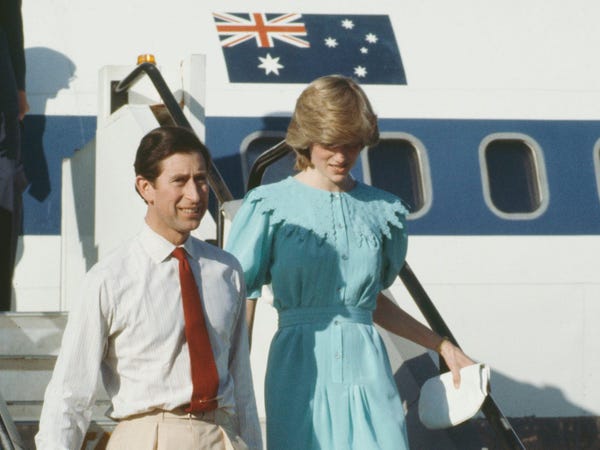 The royal couple would spend four weeks touring Australia in order to repair public opinion of the monarchy. 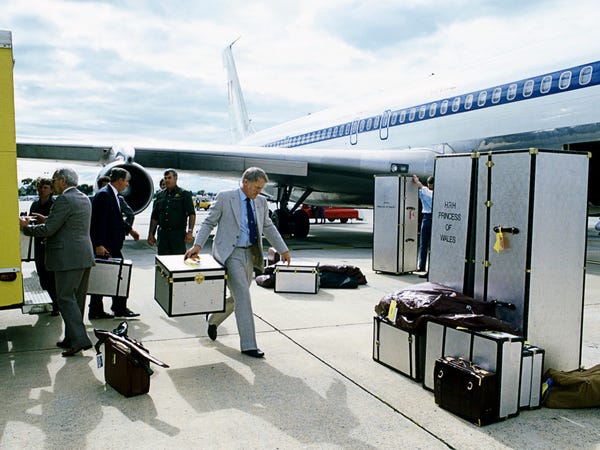 In a break with royal tradition, Diana insisted that her 9-month-old son, Prince William, travel with them. Previously, children of heirs had remained in England during overseas tours. 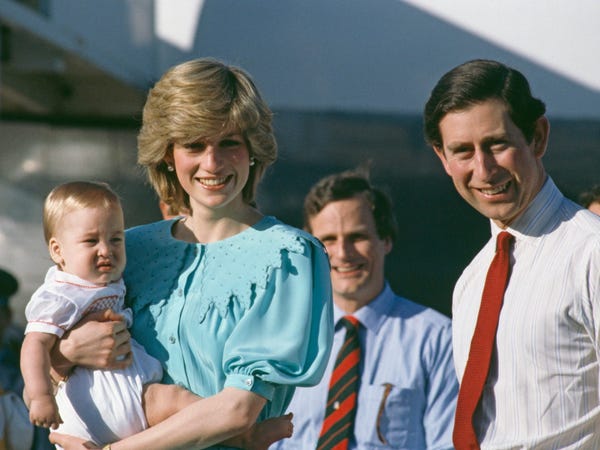 While his parents toured the country, Prince William stayed with his nanny at the family's home base, a sheep ranch in central Australia called Woomargama. 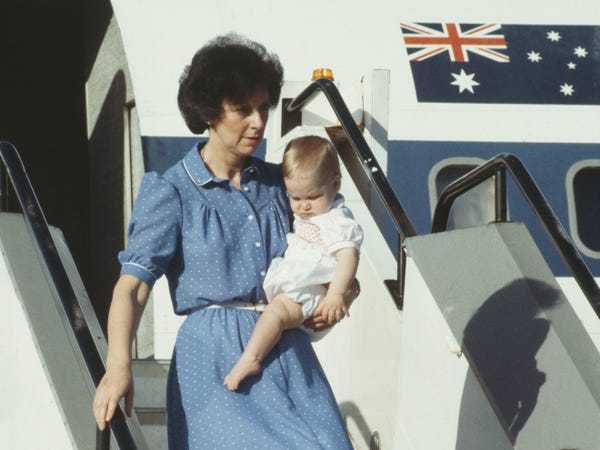 The royal couple's first official stop was at Uluru, a sacred site to indigenous Australians also know as Ayers Rock. 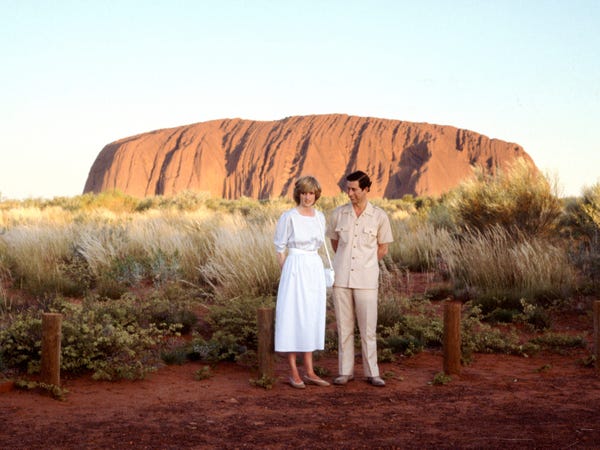 During the visit, Diana expressed her discomfort with the heat and asked for a glass of water. This endeared Diana to the public, Anita Rani explains in an episode of Netflix's "Beneath the Crown," since "royals were not supposed to show such emotions in public." 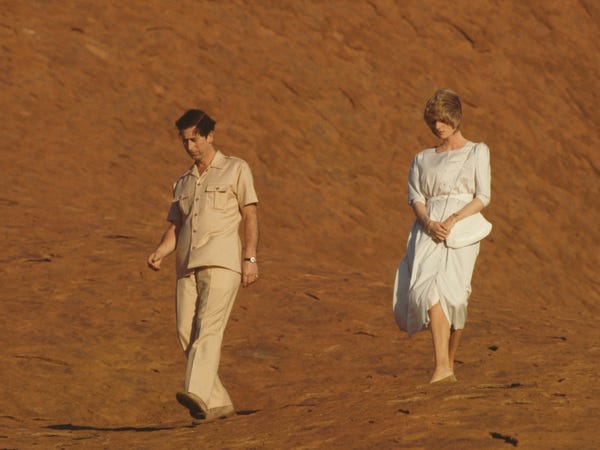 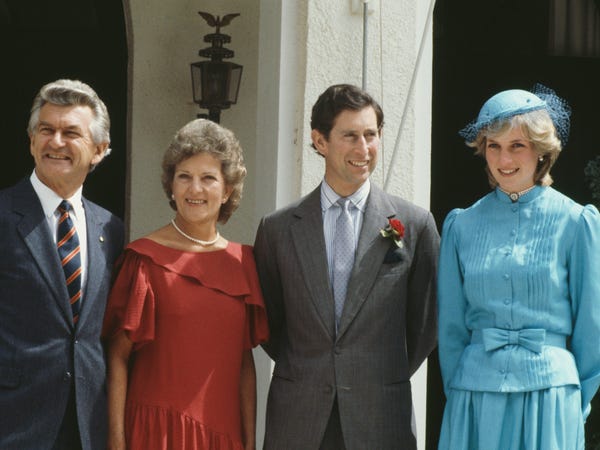 Hawke was skeptical that the royal couple could charm Australians and rebuild public faith in the monarchy, according to BBC's HistoryExtra. What he didn't count on was Diana's likability. 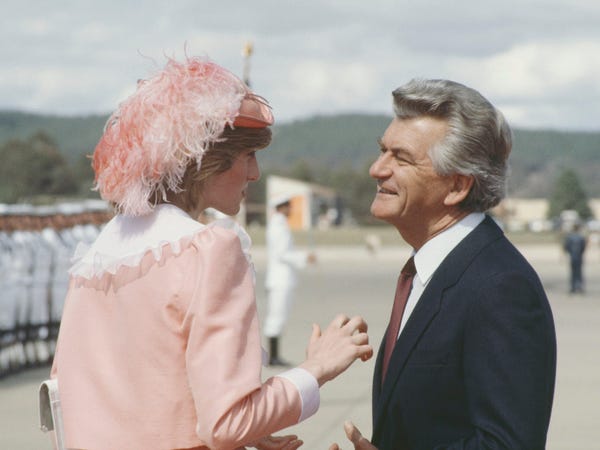 Australians quickly fell in love with Diana's easygoing manner and showed up in droves to see her. 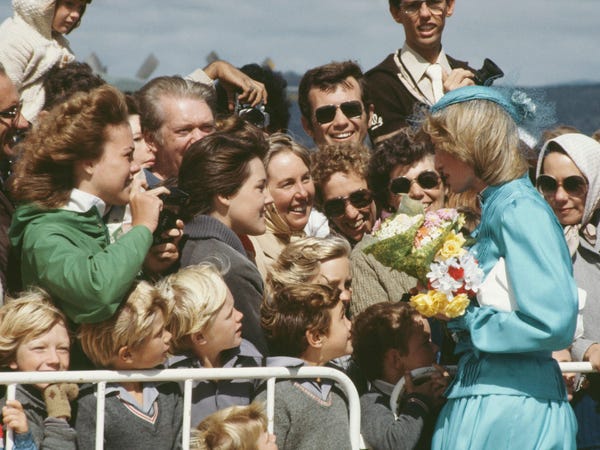 "Diana…was accessible to the public, physically and emotionally," Netflix's Rani said. "She's estimated to have shaken hands at least 6,000 times with members of the public on this tour and offered down-to-earth comments to her admirers." 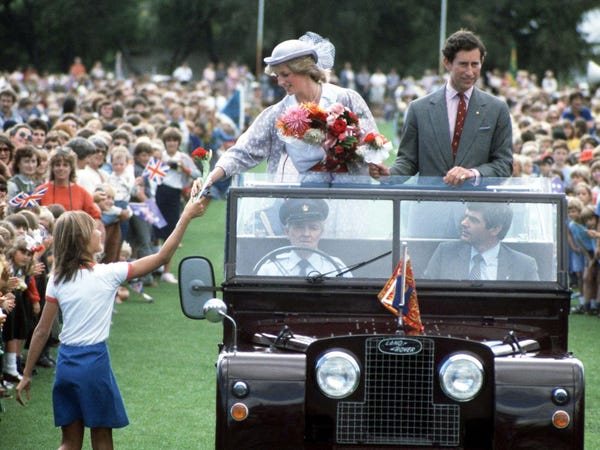 "Mothers, in particular, gravitated towards her, impressed by her refusal to leave William back in the UK," Rani said. 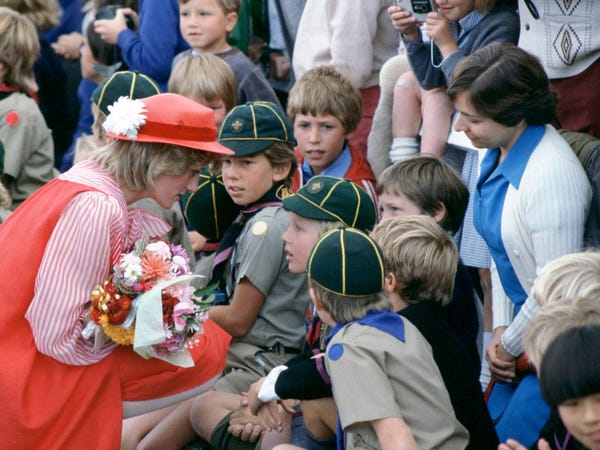 A photo taken one week after their arrival in Australia shows Diana outside of the Sydney Opera House surrounded by throngs of spectators. 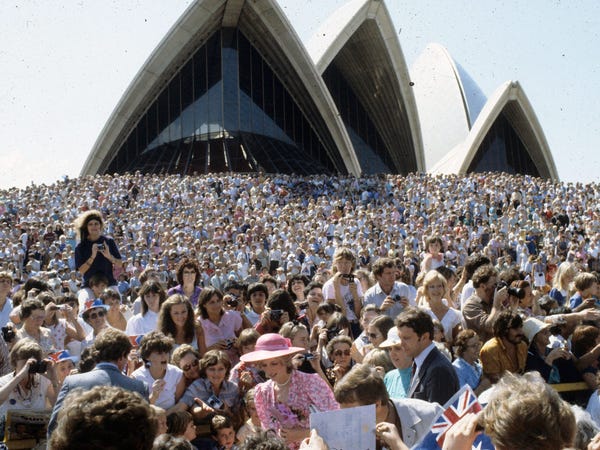 In April, The Times ran an article saying that Diana "won the heart of Australia" and that the tour was "an unqualified success, due in large part to the Princess." 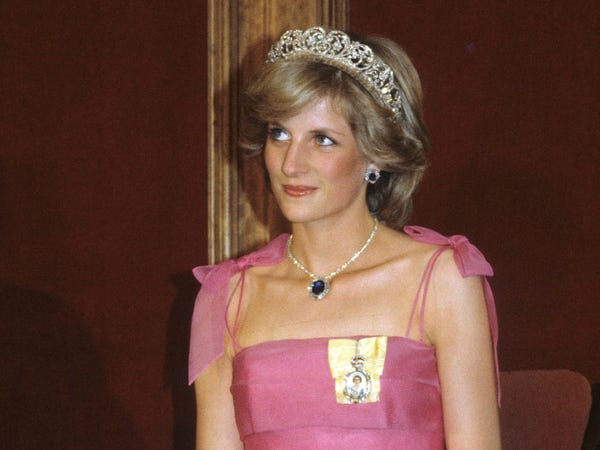 While Diana's star appeal helped the reputation of the monarchy, it served to "drive a wedge" between her and Charles, who was used to the limelight, Andrew Morton wrote in his 1992 biography "Diana: Her True Story." 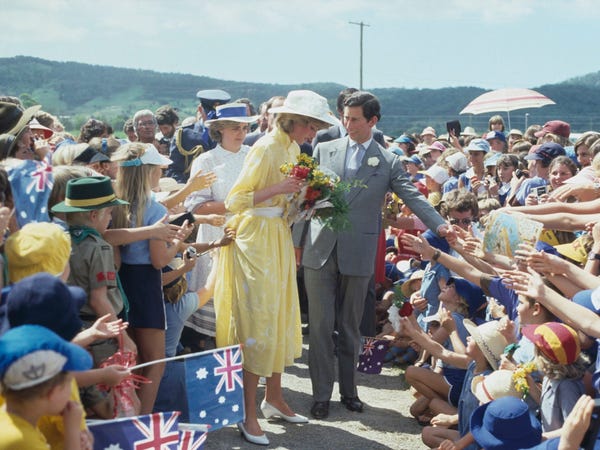 "The crowds complained when Prince Charles went over to their side of the street during a walkabout … In public, Charles accepted the revised status quo with good grace; in private he blamed Diana," Morton wrote. 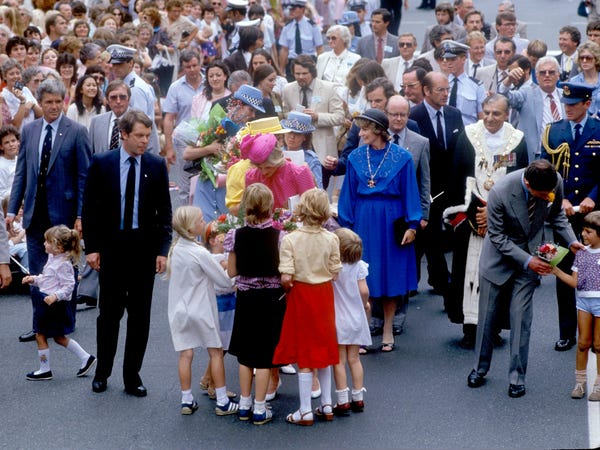 The couple did have good moments during the trip. One was during a charity ball in Sydney on March 28 where they shared their first dance together on tour. "They gave the impression that they were very much in love," Rani said of the dance. 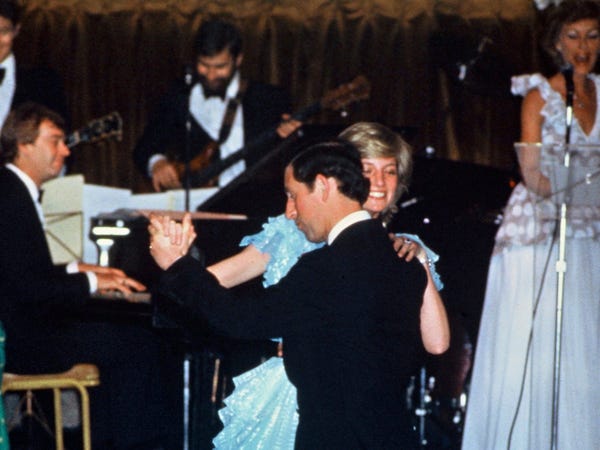 But tension grew between them as Diana's fame blossomed. "With the media attention came a lot of jealousy," Diana told the BBC in a 1995 broadcast. "A great deal of complicated situations arose because of that." 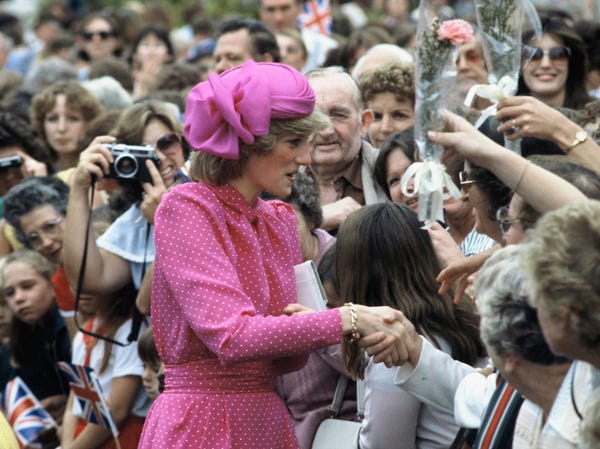 On April 17, Diana and Charles concluded their tour in Australia and flew to New Zealand for two weeks before returning home to London. 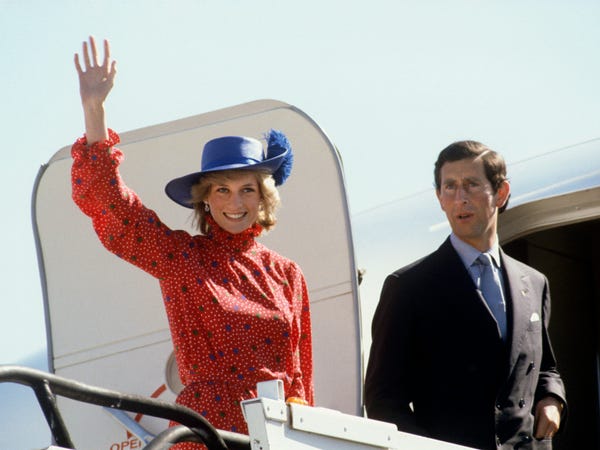 While Diana had worked her way into the hearts of Australians, the trip highlighted fissures in her marriage with Charles that would ultimately deepen over time. 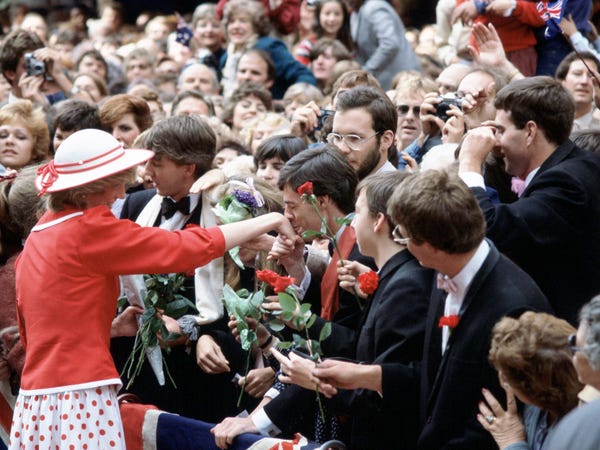