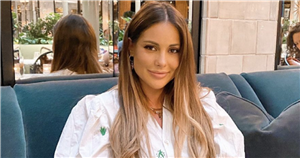 Pregnant Louise Thompson has revealed she was secretly rushed to hospital three weeks ago after coughing up blood.

The Made In Chelsea star has made no secret of the fact she has endured a difficult pregnancy following her tragic miscarriage earlier this year and recently feared that a suspected blood clot could bring her more heartbreak.

Already having to undergo more frequent scans due to being in the "high-risk category" as she has an autoimmune condition, the 31 year old detailed her scary trip back to the hospital after falling unwell.

The reality star told MailOnline: "I had to go to Chelsea and Westminster hospital because I was coughing up blood. I had to have scans because they were worried I had a blood clot.

"The chance of getting a blood clot in pregnancy is a lot higher than not in pregnancy, and I have an autoimmune condition as well," she continued. "I spent 24 hours there, and everything came back fine, but because of my condition, I'm in a high-risk category."

Louise, who is due in November, went on to explain that she "felt guilty" for saying that she found her pregnancy journey difficult because of other people who were unable to get pregnant.

Despite a "new hurdle every month" for Louise, she said that she felt relieved to have officially passed the six-month pregnancy mark.

"The good news is I am about six and a half months now. I shouldn't even think about this, but I am someone that knows all the stats, babies can be delivered prematurely so, I feel like I'm in a really comfortable place now," she added.

Louise first announced her pregnancy earlier in the year with a post via social media.

She posted a photo of her with beau Ryan Libbey as he held their 12-week scan, writing: "I'd be lying if I said it's been an easy ride, but the truth is I think poor Ryan has found it even harder than I have,"

"I'm definitely lucky to have such a sensitive partner, and I feel safe in the knowledge that you are going to be the best dad in the world."

Recently, Louise shared the surprising news that she has been having regular nosebleeds during pregnancy.

According to the NHS, nosebleeds can be a common issue during pregnancy due to hormonal changes, both heavy or light nosebleeds can last from seconds to minutes.