Pregnant mother-of-three who couldn’t afford an extension reveals how she transformed her children’s bedroom for £1,900 with bespoke bunk beds and budget buys from Amazon instead

A mother has shared the adorable moment she unveiled her children’s brand new bedroom transformation to them during lockdown.

Emma Louise Russell, 27, from Doncaster, set about performing a total refurbishment on her children’s bedroom with her partner Titch, 30, after the family’s plans to build an extension were put on hold due to coronavirus.

The pregnant mother-of-three carried out the transformation for a total of £1,947, and said the project was a much-needed distraction for her children.

Prior to the renovating, the decor was quite boyish, but now it’s a gender neutral space that is suited to her son and two daughters, and their sibling who is due in a few weeks.

She also commissioned a bespoke quad bed that suits both her older and younger children – Amelia-Grace, five, Sebastian, four, and Ruby-Maie, ten months. 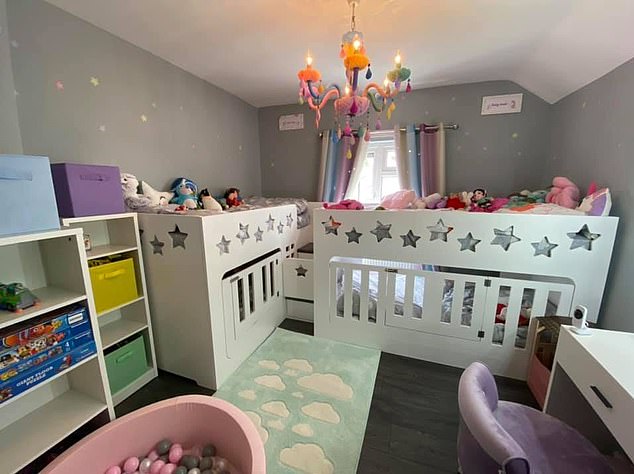 The pregnant mother-of-three carried out the transformation for a total of £1947, and said the project was a much needed distraction for her children 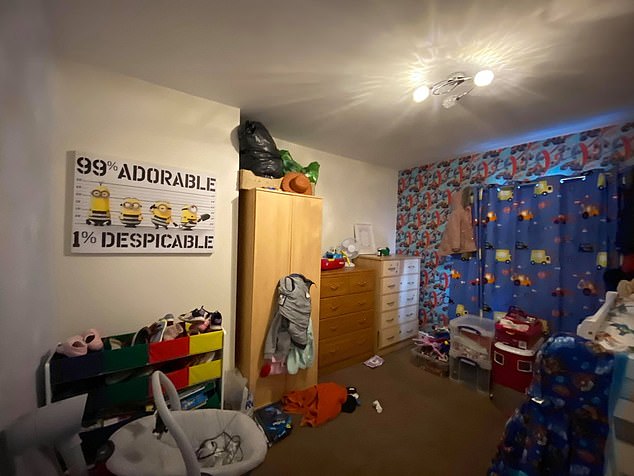 The room pictured before, with mostly boys decor. It is now a well organised oasis for the children thanks to mum Emma’s efforts

Speaking to FEMAIL Emma said: ‘We were going to get an extension but partner lost his job after my youngest was hospitalised when she was three-months-old.

‘Then Covid happened so we could no longer afford the extension and did this instead.

‘Obviously it was way cheaper than the extension and the only we could fit four in a room. I’m due my fourth in a few weeks.’

Detailing how she spent the budget Emma said: ‘The quad sleeper bed, including the drawers in the steps, safety gate, cot rails and gate on each low bed (for the babies) was £1,105, from Steps2beds. That included the delivery and installation. It took six weeks to make.

Star decals, Not On The Highstreet – £10

‘We had the whole house refloored so it’s hard to put a price on it but it was around £150 for the laminate.’

The mother spent £136 on bedding and cushions from Dunelm for the four beds and £76.99 on the green cloud rug from Wayfair.

The room was painted using Johnstone’s Manhattan Grey, which the couple already had from renovating another part of the home.

Emma, who is 35 weeks pregnant, then furnished the room with two pairs of curtains from Amazon which came to £37.72 and the multicoloured chandelier, £99, which was another Amazon find.

To add a personal touch Emma had her two girls’ names printed onto a plaque above their beds, which cost £40 from Name UK.

After nearly finishing the room Emma and her partner Matt, who goes by the name Titch, decided to reveal the transformation to their little ones.

Speaking of their reaction Emma said: ‘They absolutely love it. My little boy Sebastian, really didn’t want to go in a bedroom on his own, he’s always shared with his sister, and so now he’s super happy that he can be with all the girls.

‘Amelia, my oldest, loves her dressing table and loves how fun the room is and Ruby my 10 month old loves rattling the gate on her bottom bunk when she wakes up.’

Finishing touches including the dressing table with an illuminated mirror Emma purchased from eBay. 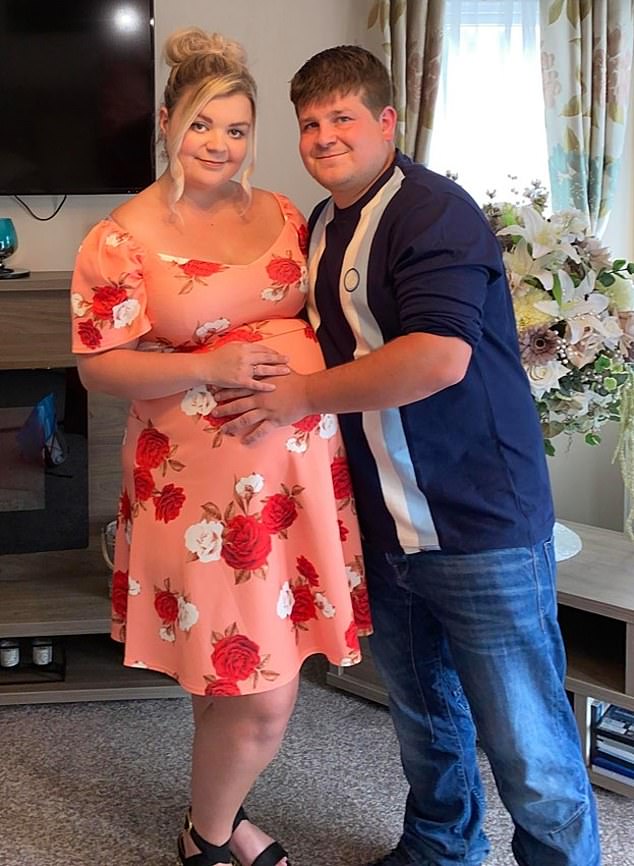 Emma Louise Russell, 27, from Doncaster, set about doing a total refurbishment on her children’s bedroom with her partner Titch, 30 (pictured together) 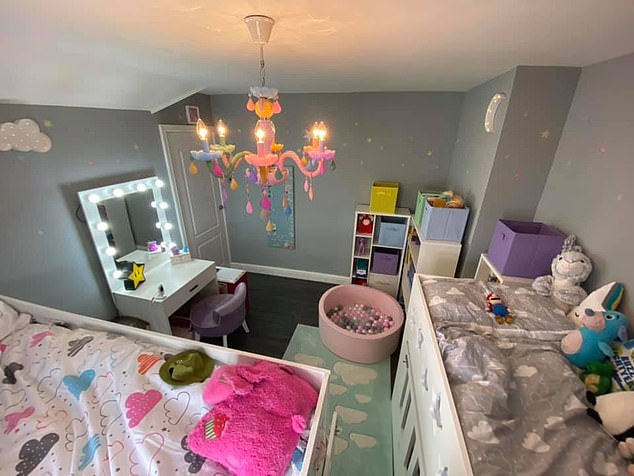 The mother spent £136 on bedding and cushions from Dunelm for the four beds and £76.99 on the green cloud rug from Wayfair 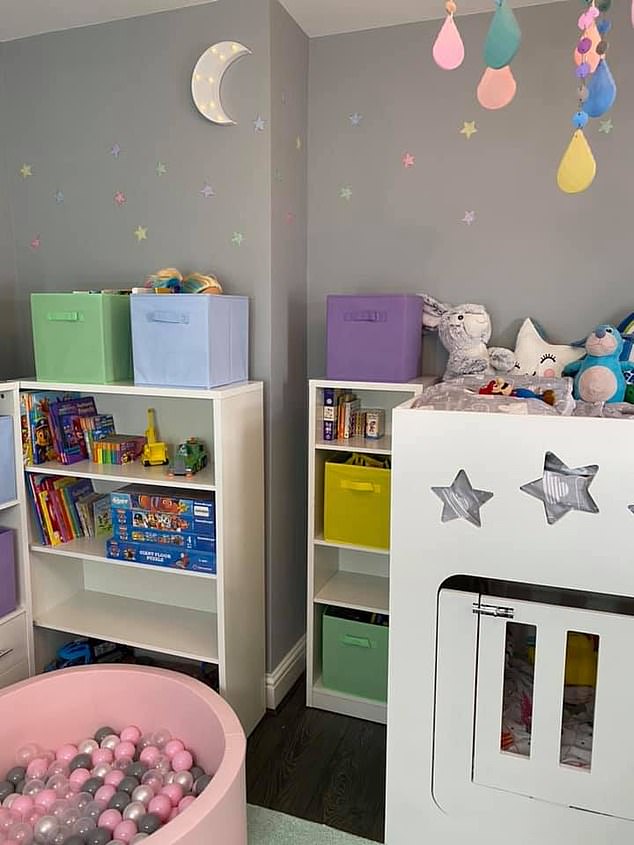 After nearly finishing the room Emma and her partner Matt, who goes by the name Titch, decided to film their reveal to the little ones 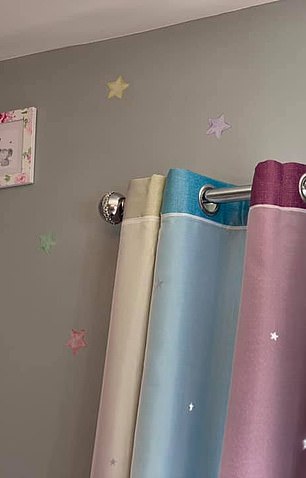 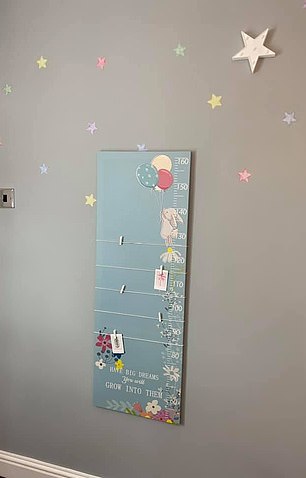 To add a personal touch Emma had her two girls’ names printed onto a plaque above their beds, which cost £40 from Name UK (left) and a growing chart (right)

The mother, who documents her home renovations on her Instagram account, @Adventuresofablendedfamily, shared images of the redone bedroom with the caption: ‘In love with the children’s new bedroom…this is how you fit four kids in a three bed semi (the box room is being made into a walk in wardrobe).’

Emma added: ‘We are currently ordering some Ikea wardrobes that we are going to create a walk in wardrobe in the spare box room (it’s a large box room so will fit all the children’s clothes/ shoes/ coats etc plus can fit in extra storage like suitcases etc). So there is no clothes storage in their bedroom to make space to play.’ 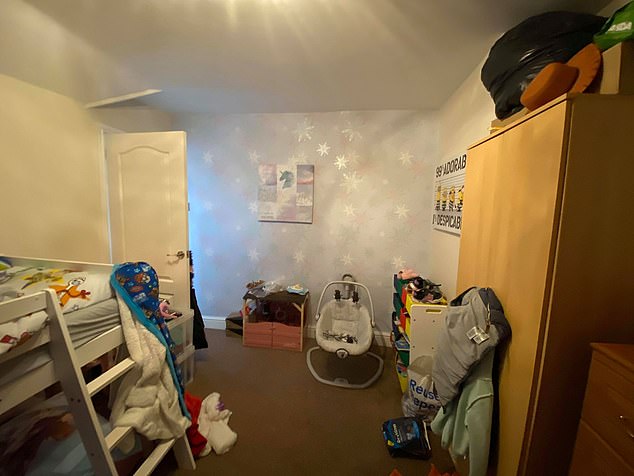 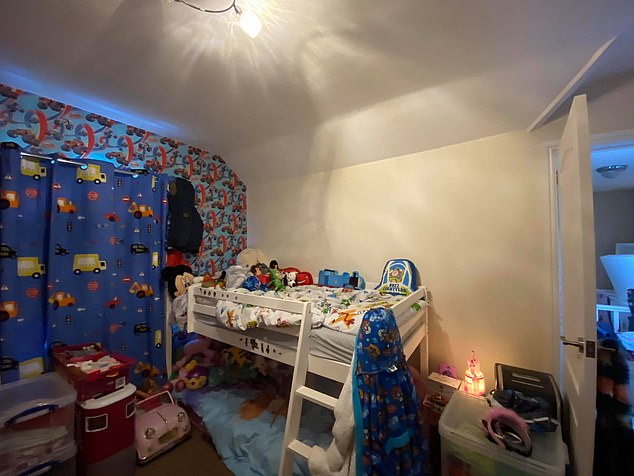 Previously the room was more geared towards Sebastian, five, but it is now a more gender neutral space