‘Wishing you a happy and healthy first day of Spring’: Prince Charles and Camilla share carefree picture surrounded by wild flowers in the garden of Highgrove to mark equinox

Prince Charles and Camilla, Duchess of Cornwall have shared a sweet image from their garden at Highgrove  to celebrate the first day of spring.

The royal couple wrapped up warm as they posed on the grounds of their Gloucestershire estate, surrounded by an array on growing flowers to mark the early signs of spring.

Charles, 72, sported a grey tweed jacket with wide leg brown trousers and an open collar blue shirt while wife Camilla, 73, wore a navy puffed jacket and black slacks as she clutched a bouquet of tulips and loved at the future king with a loving gaze.

‘Wishing you a happy and healthy first day of Spring.

‘The Prince of Wales and The Duchess of Cornwall in the garden at Highgrove,’ they captioned the image which they shared on Twitter and Instagram. 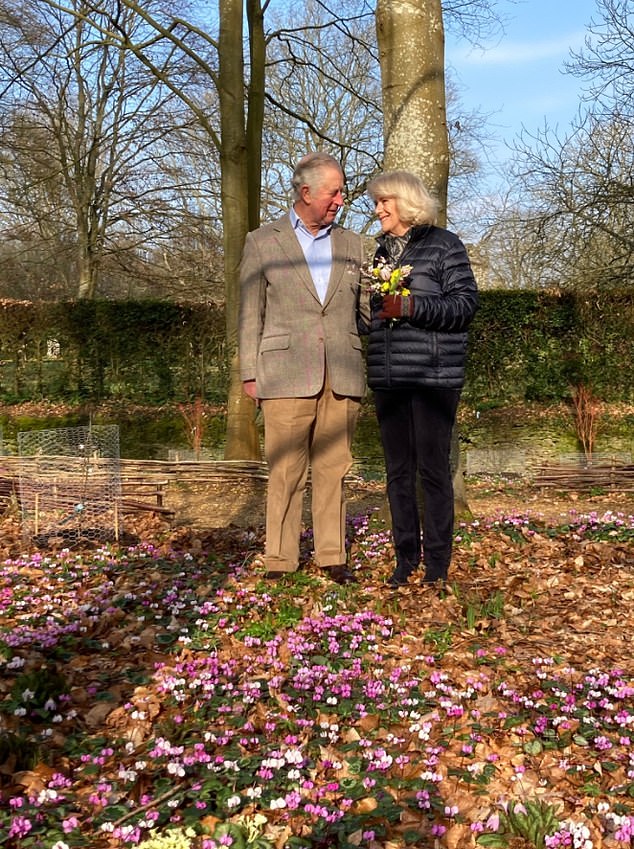 Prince Charles and Camilla, Duchess of Cornwall have shared a sweet image from their garden at Highgrove to celebrate the first day of spring. The royal couple wrapped up warm as they posed on the grounds of their Gloucestershire estate, surrounded by an array on growing flowers to mark the early signs of spring

Royal fans were quick to praise the couple, calling the image ‘sweet,’ ‘cute’ and adorable’.

‘What a beautiful photo,’ one fan said.

‘That has to be *the most* beautiful photo I’ve ever seen of members of the Royal Family. The entire photo is the very portrait of nature. Congrats to the photographer and best wishes to the Prince & Duchess,’ another wellwisher added.

‘This is the cutest thing ever. They are so sweet, I can’t… Thanks for sharing and a very happy first day of spring to you, too!’ wrote a third.

‘You can see that they love each other so deeply,’ added another.

‘How sweet, what lovely wild flowers,’ commented a Twitter use.

‘Beautiful photograph. May you both enjoy a lovely weekend and first day of Spring.’ said one. 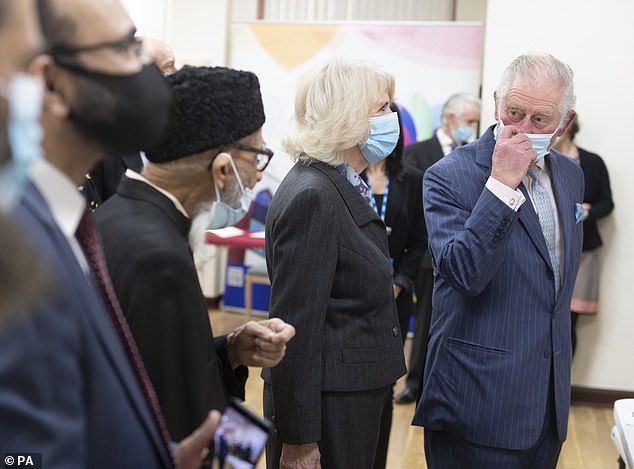 The carefree photo comes amid a turbulent few weeks for the royal family, which has seen Charles’ 99-year-old father Prince Philip leave a month long stay in hospital following a heart operation, while his son Prince Harry, 36, spoke to Oprah Winfrey in a bombshell interview which was critical of The Firm.

Earlier this week the Prince of Wales said he was ‘thrilled’ that his father the Duke of Edinburgh had left hospital following a month under the care of medical staff after being admitted with an infection and later undergoing heart surgery, but is yet to speak publicly on his son and daughter-in-law’s revelations.

Prince Philip, the nation’s longest-serving consort, spent 28 nights as a patient in London at King Edward VII’s Hospital and St Bartholomew’s Hospital – his longest ever stay. Philip was initially admitted on a precautionary basis for an infection, before having a heart operation midway through his four-week period in hospital.

Charles, who was visiting a pop-up coronavirus vaccination centre at Finsbury Park Mosque in North London this week, said he was delighted that his father was out of hospital, revealing: ‘I am thrilled about it.’ When asked if he had spoken to Philip yet, Charles replied: ‘Oh yes, I have spoken to him several times.’

Next week, Prince of Wales and Duchess of Cornwall are to travel to Greece next week for an official two-day visit at the request of the Government.

During the visit, from March 24-25, Charles and Camilla will attend the Bicentenary Independence Day celebrations in Athens, following an invitation from Greece’s prime minister Kyriakos Mitsotakis.

The couple will attend a reception at the newly reopened National Gallery of Greece on March 24 hosted by the country’s president Katerina Sakellaropoulou.

On their final day the prince and his wife will attend a wreath-laying ceremony at the Tomb of the Unknown Soldier in Syntagma Square and a traditional military parade.