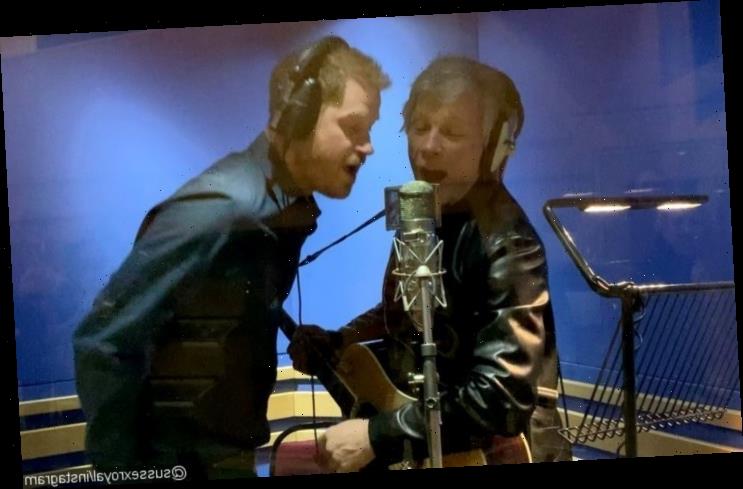 A video shared on the Sussex Royal Instagram account shows the Bon Jovi frontman strumming his guitar after coaching the Duke of Sussex in a recording booth with headphones on.

The rocker and the royal are teaming up with the Invictus Games Choir to record a version of Bon Jovi‘s veteran-inspired track “Unbroken” for the Invictus sporting tournament Harry founded for injured ex-soldiers.

After meeting on the steps of the building, the pair went to Abbey Road’s studio two, where The Beatles recorded many of their hits in the 1960s. But first they also recreated the famous cover to The Fab Four‘s “Abbey Road” album by posing while walking across the iconic level crossing outside the studio.

A video shared on Harry’s Sussex Royal Instagram account showed the “Always” hitmaker coaching him in a recording booth with headphones on, with the musician strumming a guitar and telling the singing novice it would be “really easy” and to “breathe”.

Footage posted on Twitter by Daily Mirror royal correspondent Russell Myers also showed the pair discussing the contribution of the choir, a group made up of injured ex-service personnel originally formed for the 2016 edition of the games, to the record.

Bon Jovi said that he found their “desire to serve” and stories “touching” and that they “became a rock band” when singing “Unbroken”.

Both of the rock star’s parents served in the U.S. Marine Corps, and he recorded “Unbroken” for the 2019 documentary film “To Be of Service”, which focused on the stories of ex-soldiers suffering from post-traumatic stress disorder.

The new charity version of “Unbroken” featuring Harry will debut next month, ahead of the games, which will take place in The Hague in the Netherlands in May. Proceeds from the single will go to the Invictus Games Foundation.