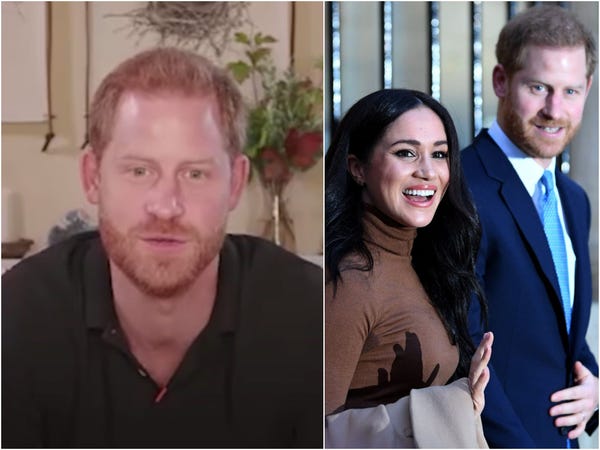 The Duke of Sussex has opened up about how Meghan Markle changed his understanding of unconscious bias.

Prince Harry, who resigned as a working member of the royal family earlier this year, said he previously didn't realize that unconscious bias existed because of his "upbringing and education."

The prince made the observation during a virtual conversation with the Black Lives Matter activist Patrick Hutchinson, who carried an injured white counter-protester to safety in London in June.

"It's when you can't really point the fingers, especially when it comes to unconscious bias, but once you realize or feel a little bit uncomfortable then the onus is on you to go out and educate yourself because ignorance is no longer an excuse," Harry said during the conversation.

"Unconscious bias, from my understanding, having had the upbringing and education that I had, I had no idea what it was. I had no idea that it existed," he added. "As sad as it is to say, it took me many, many years to realize it. Especially then living a day or a week in my wife's shoes."

The Duke of Sussex and The Duke of Cambridge attended Eton College, a $55,000-a-year private boarding school for boys.

The school, which Harry attended from 1998 to 2003, recently apologized for its reaction to racism experienced by one of the school's first Black students in the 1960s.

Dillibe Onyeama was told that he would no longer be permitted to visit Eton after he wrote a book detailing the racist treatment he experienced at the school, which was published in 1972.

The book details Onyeama's former classmates as attributing his poor grades to his race, and accusing him of cheating and of attacking his mother.

Simon Henderson, who has been principal of the school since 2015, said earlier his year that he would like to meet Onyeama to apologize in person.

"I will be inviting Mr. Onyeama to meet so as to apologize to him in person, on behalf of the school, and to make clear that he will always be welcome at Eton," Henderson said in a statement, according to The New York Times.

Prince Harry didn't elaborate about Meghan Markle's experience with unconscious bias during the conversation with Hutchinson.

However, he previously called out some of the press' racist coverage of the duchess in 2016, saying he hoped they would "pause and reflect" on their coverage "before any further damage is done."

Just a few of the headlines Markle was subjected to over the years included that she was "fueling human rights abuses, drought, and murder" for eating avocados and that her mother's hometown was "(almost) straight outta Compton" and "gang-scarred."

"We would not comment on the below," a Buckingham Palace said when contacted by Insider for this article. "The Duke is not a working member of the Royal Family and any comments he makes are made in a personal capacity."

Eton College did not immediately respond to Insider's request for comment.