Quick sales, $69m ‘tokens’: What it takes to get into the digital art world

In February, Melbourne artist Tom Keukenmeester found himself going down a rabbit hole.

A friend who had been trading in cryptocurrencies urged the 32-year-old painter of mostly still lifes and portraits, to diversify into digital art. 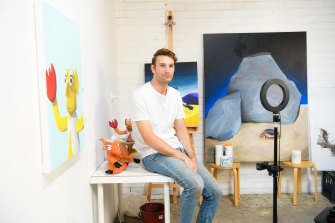 Keukenmeester was preparing for an upcoming exhibition of paintings and sculptures scheduled to open in May at Jerico Contemporary gallery in Woolloomooloo, Sydney.

The trader had observed short videos and digital images starting to sell for escalating prices, and new trading platforms springing up to sell them.

This trend burst spectacularly into the mainstream last week when one of the world’s leading bricks and mortar art auction houses, Christie’s in London, sold its first digital artwork for an eye-watering US$69 million ($90 million).

Keukenmeester found Melbourne’s extended COVID-19 lockdown gruelling so the opportunity to render his work digitally and sell it in this burgeoning international art market was enticing.

Artist friends living in New York and London had produced works for the new auction platforms and, he says, they were selling editions for a few hundred dollars each.

“A lot of people are making a lot of money quite quickly,” Keukenmeester says.

“There is a whole new market for people who are interested in art that wasn’t there before. It’s not going away.”

The sites tend to auction artworks in the cryptocurrency Ether.

A photographer friend in London arranged for Keukenmeester to be invited to show on the curated platform Foundation, and so he set about digitising and registering his artworks. The registration cost about $100 per work and he had to pay that in Ether currency, which meant he had to first buy the currency itself.

He then found it was his responsibility to drum up interest in his art to get it trending.

Here, he hit a snag. The sites that trade exclusively in cryptocurrencies have a narrow audience.

“I haven’t got enough crypto friends,” Keukenmeester says. “I needed about eight (supporters to trigger interest from others) and I’ve got one, so I came to the conclusion I would be better off finishing the work for my actual show.”

Keukenmeester hasn’t given up trying to build his profile in the digital market but having sniffed the wind he’s returned to working with tangible matter for now.

He is confident crypto art is not a passing fad.

To put Christie’s US$69 million sale into perspective, it ranks among the top three prices paid at auction for art by a living artist worldwide. In Australia, the record price for any artwork is $6 million paid late last year for a large 1975 Brett Whiteley Lavender Bay painting. 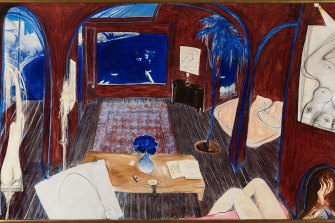 The artwork Christie’s sold is a compilation of 5,000 drawings called Everydays: The First 5000 Days, by Mike Winkelmann, who goes by the name Beeple.

It was sold as an NFT, a non-fungible token, which is essentially a unique line of code the buyer has exclusive rights to.

The buyer, who goes by the name Metakovan, is the founder of Metapurse, the world’s largest fund for NFTs. 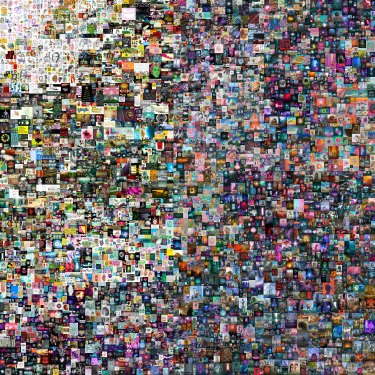 Everydays: The First 5000 Days, by Beeple, which sold for $US69.3 million.Credit: Christie’s

Australian art auction houses and galleries contacted by The Sydney Morning Herald and The Age declined to discuss non-fungible token art, saying it was beyond their expertise.

Nima Sagharchi, a Middle Eastern and Asian art expert at London auction house Bonhams, was not so shy.

Bonhams, which has offices in Melbourne and Sydney, doesn’t intend to auction NFT art in the immediate future but Sagharchi is excited about its potential.

“NFT is just a slightly alienating term for something everybody already understands,” Sagharchi says.

“I’ve been telling everybody they’ve been interacting with graphic art their entire lives, whether it is graphic design, animation, illustration.”

He says NFT technology is for the first time allowing digital artists to build an ownership structure around their art.

“The hype is making people think it is more revolutionary than it is.

“The revolutionary aspect is there is now a universal guarantee of ownership and tradability.”

The piece, like a music video, has a spinning head with a heat sensor effect on it.

“The way these editions work is the artist puts the work up for sale for a given time period, say one hour, and however many people buy it within one hour defines the editions, up to a max of 9999,” he says.

This clip sold 4,934 editions for US$333 each. The artists receive 85 percent of the US$1.6m haul and the platform, Nifty Gateway, receives 15 percent.

“Once the hour is up they can only be bought and sold on the secondary market and the edition is closed.”

Sagharchi paid US$500 on the secondary market because he missed the release.

“It’s a tremendous success story, but not every release goes nuts like that,” he says.

With speculation rife, art dealers and critics are urging artists not to lose sight of the actual art.

“One of the dangers of crypto art is you focus too much on the crypto and not enough on the art,” Sagharchi says.

The Christie’s sale has mainstreamed NFTs but an acquisition by a major museum is necessary to legitimise it. So far, none of them are known to have acquired an NFT artwork.

The National Gallery of Victoria for its current Triennial commissioned and acquired a major conceptual digital video by American Turkish artist Refik Anadol.

Called Quantum Memories the artist used quantum computing to process more than 200 million nature-related images from the internet into an algorithm.

The resulting real-time video is described as being both an alternate dimension of the natural world and a radical visualisation of our digitised memories of nature. 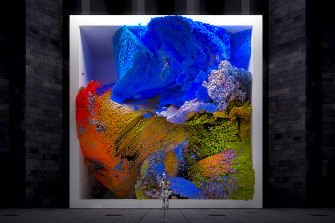 Also, the artwork does not exist in a physical sense but comes to life only when displayed on a vast screen.

For consumers, the ability to own digital works for a few hundred dollars is exciting but their re-saleability is in no way guaranteed.

Then there are the hefty environmental costs of producing unique codes. Time magazine reported that computers working on calculations in the Etherium blockchain – mostly to mine the associated cryptocurrency – use 26.5 terawatt-hours of electricity a year, equivalent to Ireland with a population of 5 million people.

Advocates are confident the polluting factor will ease as the technology improves but there is no evidence yet of this happening.

Another concern is that, for all the glorious blue-sky opportunity, reports abound of creative theft and of artworks being broken up and redistributed. Traditional notions of the hard-won moral rights of the artist are no longer guaranteed.

“The Oz market is maybe a year or two behind but because this trend is digital it might make its way across the pond a lot quicker but it’s inevitable. It will come.”

Find out the next TV shows, streaming series and movies to add to your must-sees. Sign up to get it every Thursday.