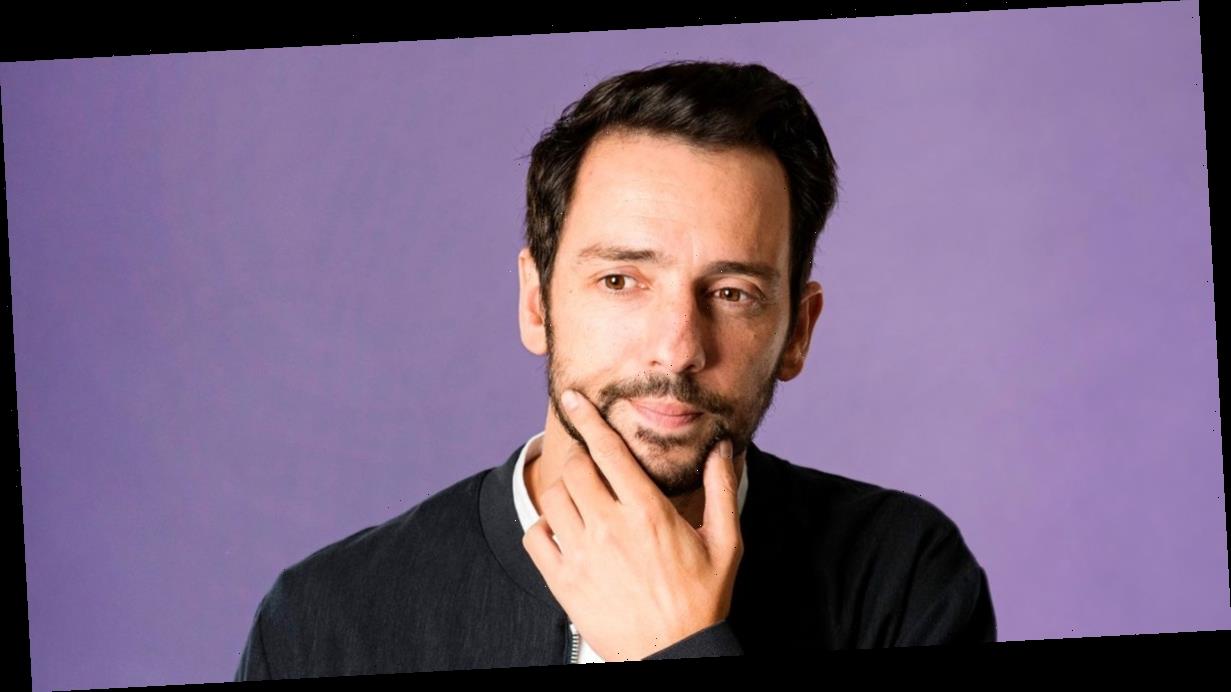 We half expect Ralf Little to slouch through the door wearing a baseball cap and shiny tracksuit.

So successful was the actor in two of his early roles – as sweetly dim Antony in The Royle Family and equally sweetly dim Jonny in Two Pints Of Lager And A Packet Of Crisps – it’s as if he’s forever cemented in our psyche as a dopey teenager.

But 20 years have passed since then: Ralf has constantly worked on stage and screen, written his own sitcom, and proved via Twitter spats that he’s no political dunce either.

Sipping on water at his publicist’s London office, Bury-bred Ralf is in fact articulate, charming and witty.

Wearing a woollen peach polo neck jumper, there’s a hint of a tan beneath a smattering of stubble, ‘Trust me, this is brown,’ he gestures at his face.

‘I’m normally the colour of death, not even warmed up, I look like a ghost in photos.’

Back in the UK after filming in Guadeloupe, Ralf’s latest role – his first as a lead character – is playing new detective DI Neville Parker in the Beeb’s hugely popular whodunnit Death In Paradise .

Splitting his time between the UK, America and the French Caribbean, Ralf – who turned 40 yesterday – admits there’s another reason why he’s got a rosy glow…

It’s been an exciting year, what with your role in Death In Paradise and turning 40…

I’ve struggled professionally with people thinking I’m stuck in my 20s. Death In Paradise feels like a step up, a coming-of-age role for me. I’m a grown man now and finally playing one. And in real life, I’m engaged!

Congratulations! Tell us about your fiancée.

She’s called Lindsey Ferrentino, she’s 31, and an American playwright and screenwriter. I met her when I was in a play she wrote with Kris Marshall. She came out to Guadeloupe for a month while I was filming and she wrote three films out there.

She’s doing annoyingly well. If we were ever going to be a power couple I’d have to seriously up my game. Her career is exploding in a way that makes me both incredibly proud, and obscenely jealous.

Did you get down on one knee?

Of course! Otherwise it’s not a proposal, right? I wasn’t going to go, ‘Here’s your pint, love, and by the way…’

We got engaged the September before last. It was very romantic. We were in a country house, it was a big surprise.

To her, I mean, I planned it in advance. I had a total result with the ring, though. She said to me if she ever got engaged there’s only one ring for her – her grandma’s, it’s absolutely beautiful. And free. I was like, ‘Brilliant!’

Have you got a date yet?

We were discussing dates then Death In Paradise came along. So we talked about getting married in Guadeloupe, which would be nice, but that takes a lot of planning.

So the disappointing and unromantic answer is, we don’t know when it will be. But I have a feeling soon it’ll be like, ‘Why are we not making this happen yet?’

How did you know she was The One?

It just felt right. She’s my best friend. This is the real thing for me. I’ve never been engaged before. I’m the last of my friends to have kids – everyone is starting to think it’s a bit weird.

I love the idea of kids, but we have to work out when.

I am away for five months of the year in Guadeloupe, then I split my time between London, New York, Florida and LA.

People ask us about children, but we need to think where we are going to live first – we have the longest of long-distance relationships, she lives in the States.

That’s why it felt important to make more of a commitment to each other by getting engaged. It’s like I have two lives; when I’m alone staying in and watching South Park with a takeaway because Lindsey is on the other side of the Atlantic, and my time when I’m with her.

Death In Paradise is massive – is there pressure coming into an established show?

It’s lovely to be in a series that is adored by 9 million people. I found it comforting that it’s so popular, because some things aren’t a flop, but they just don’t catch fire.

I said to my mum, ‘This is great, I get to do a show so many people love, there’s no pressure,’ And she said, ‘Well, unless you ruin it for them all.’ Thanks for that, Mum.

So what was it about a high-profile, well-paid job in a beautiful location that appealed to you?!

I know, I agonised over it for all of two seconds! I really wanted this, so when my agent told me I’d got it I shouted, ‘Yesssss!’ down the phone.

I wasn’t cool. I bought myself a very nice designer watch to celebrate, which was also a 40th birthday present to myself.

He’s a Manchester detective sent to Saint Marie when a woman from back home is murdered. He spots the little details most people miss, that’s how he cracks the killer.

He’s a fish out of water on the island, though, he’s allergic to pollen, he gets heatstroke, and he’s a magnet for mosquitos.

Did you have to hit the gym and use fake tan for beach scenes?

Neville doesn’t go in the sea, as seawater irritates his skin. I did some gym work just in case I saw in the script, ‘Neville gets out of the shower’, or, ‘Neville stumbles out in his underpants’.

But there wasn’t. Damn. I am so pale in real life. Make-up artists trowel on foundation just to make me look like I’m alive.

Did the other actors who starred in the show before you give you any advice?

Because I was following in their footsteps I spoke to all of them – Ben Miller, Kris Marshall and Ardal O’Hanlon.

Without hesitation they all said, ‘Congratulations, mate, you’re going to be great,’ which is a very un-actorly thing to do. We’re not known for wishing each other well. We hate the idea of our contemporaries succeeding!

Do you ever hang out with your Two Pints… mates, Will Mellor and Sheridan Smith?

I haven’t seen Sheridan for a while, she’s insanely busy and successful. I’ve seen a bit of Will, we’re both United fans, so we’ll watch football together. But we have very different lives – he has two kids.

I look back at that show with more pride now, at the time I thought it was deeply unfashionable. We must have been a nightmare to work with, all aged 18-22, in a hit show, egos all over the place. We must have taken some wrangling.

Where’s the weirdest place you’ve been asked for a selfie?

In a urinal. I was midflow and said, ‘Give me a minute, mate.’ He was trying to shake my hand. I was thinking, ‘Not until you’ve washed your hands, thanks very much.’

Who would play you in a film of your life?

It would be nice if it was Johnny Depp. But let’s be honest, it would be Blake Harrison from The Inbetweeners.

We get mistaken for each other all the time. If I could change one thing about my appearance it would be my nose. What’s wrong with it? Come off it – it goes in about four different directions!

– Death In Paradise is on Thursdays at 9pm on BBC One