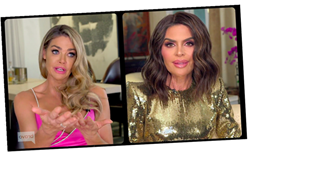 Time has not healed all wounds for the Real Housewives of Beverly Hills. On Wednesday, Bravo dropped the trailer for the group’s upcoming reunion — and once again, the Denise Richards drama takes center stage.

The actress clashes with her co-stars and walks off camera in the virtual reunion, after her marriage to Aaron Phypers and alleged relationship with Brandi Glanville become topics of discussion. Denise has denied Brandi’s claims they had sex.

“You bring up your husband’s penis almost every show!” Lisa Rinna yells at Denise, who is visibly upset.

Lisa also references a story Denise told about her husband last season. “The whole f**king world knows about Denise’s husband going and getting a happy ending from, like, a 100-year-old woman” she points out.

The talk about the Brandi rumors seems to be the last straw for Denise, who accuses Andy Cohen of “trying to discredit this.” (The “this” she’s referring to is unclear).

“I’m showing all sides,” he replies, as Erika Jayne quips, “Except Brandi’s side.”

That’s seemingly when Denise gets up and storms off. Watch the trailer — which also features Dorit Kemsley and Kyle Richards’ rehashing their tiff, Kyle accusing Garcelle Beauvais of never paying her pledged donation at a charity event, and Sutton Stracke sharing her “disdain” for a co-star’s style — below.