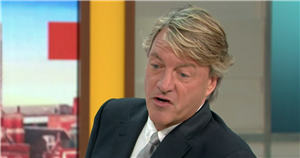 Things became very tense on Good Morning Britain on Wednesday when protestor Liam Norton got into a fiery shouting matching with presenter Richard Madeley about home insulation and the climate crisis.

The protestor became rather infuriated quite quickly with Susanna Reid and with Richard, 65, particularly when he reminded him that his protests that have been taking place on the M25 caused a passenger who was caught in traffic to have a stroke.

Richard also labelled Liam as a "fascist" and that his protests have had lead to huge consequences.

Richard said: " A couple of days later a woman suffered a stroke sitting in in a car in solid traffic."

He added: "The woman couldn't get to hospital in time and she is now paralysed, you can not argue that it's not a direct result from your actions.

"How can you possibly justify putting a woman in hospital who can not speak and not move because of what you were doing?

"What would you say to the son if he was standing here right now?"

Liam replied: "We tried to get in contact with LBC…"

But Richard was having none of it, and exclaimed that "he didn't care."

One GMB fan said: "When you walk out you e lost the argument?? Like Morgan????"