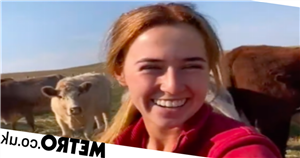 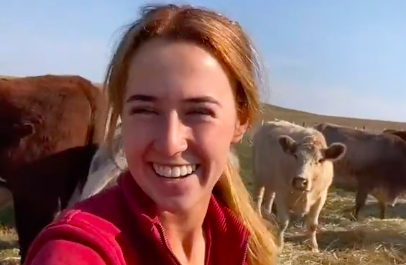 The Australian social media star has amassed a following of nearly 60,000 on the platform with her videos documenting her life as a livestock farmer on her family’s Latrobe property in Tasmania.

Her father confirmed to The Mercury on Thursday that Loane had died days after her final video was posted on TikTok.

Phillip Loane said: ‘She was a lovely, crazy young woman who was an invaluable member of our family. Words can’t describe our loss.’

He described his daughter as someone whose ‘smile lit up the room’ and who ‘wasn’t afraid to get her hands dirty’.

R U OK? Day is an annual day marked in September by the Australian suicide prevention organisation R U OK? to address social isolation and promote community.

Loane posted videos of herself tagging lambs, tending to the land of her family’s farm and seeding, tasting the oversized vegetables she grew herself, and lip syncing to country songs.

The social media star, who went by Catie on TikTok, was also a keen Aussie Rules player, and her team at Devonport Football Club paid tribute to her on Facebook.

A statement from the club read: ‘It is with deep sadness and regret that the Devonport Football Club acknowledges the sudden passing of one of our female players, Caitlyn Loane.

‘The Board, the members, players, volunteers, sponsors, and supporters of the Devonport Football Club convey our sincere condolences and warmest thoughts to Caitlyn’s family and friends, which, of course, includes her teammates in the DFC Senior Women’s team.

‘The past week has put into context what really matters in life, and has reminded us all that football, as unifying as it is, is just a game after all. The priority of the Devonport Football Club at present is to provide an empathetic, supportive network to all associated with the club, with particular focus on those most affected by the tragic passing of Caitlyn.’

The team will hold a minute’s silence before their match this Saturday.

Followers have shared their condolences on Loane’s final video, which was posted on June 27.

One comment read: ‘What a horrible loss. My heaven be filled with plenty of farm animals to keep you happy’, while another person wrote: ‘I would have swam to Tassie for a talk about how important you are. RIP.’