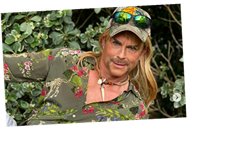 Rob Lowe may be taking on Joe Exotic, the lead character from Netflix’s hugely popular docuseries Tiger King: Murder, Mayhem and Madness. Lowe is in discussions with Ryan Murphy about a scripted adaptation of the wild tale, which he would headline.

Lowe teased the potential project in an instagram post, in which he poses as the Oklahoma animal trainer at the center of the series who is now in prison for hiring a hitman to murder a local animal-rights activist.

“Ryan Murphy and I will be developing our version of this insane story. Stay tuned!” he wrote.

There are no details about the project and whether it would be a movie or limited series. If it comes to fruition, it would likely be for Netflix where Murphy is under a mega overall deal.

Tiger King hit the streamer on Friday, March 20 and over its premiere weekend brought in an average minute audience of nearly 2.4 million U.S. TV viewers, according to Nielsen. It drew 34.3 million unique viewers in the first 10 days of its release, eclipsing the Season 2 numbers for Netflix’s hit series Stranger Things.

The Netflix docuseries centers on the story of Joseph Maldonado-Passage, aka “Joe Exotic,” a former Oklahoma tiger-zoo owner who’s serving a 22-year prison sentence for his role in a murder-for-hire plot against Baskin, who was trying to shut down his big-cat operation.

This would the second scripted retelling of Joe Exotic’s tale.UCP is in development on Joe Exotic, a limited series starring and executive produced by Kate McKinnon. The SNL star would play Carole Baskin, the activist who tangles with Exotic in the wild tale. That project is based on the second season of Wondery’s Over My Dead Body podcast.

Under Murphy’s overall deal with Netflix, he has limited series Hollywood set for a May 1 launch date. That series follows a group of aspiring actors and filmmakers in post-World War II Hollywood as they try to make it in Tinseltown — no matter the cost. Netflix’s Murphy-helmed The Prom, a movie adaptation of the Tony-nominated stage musical that stars Meryl Streep and Nicole Kidman, had its production shut down amid the current coronavirus crisis.