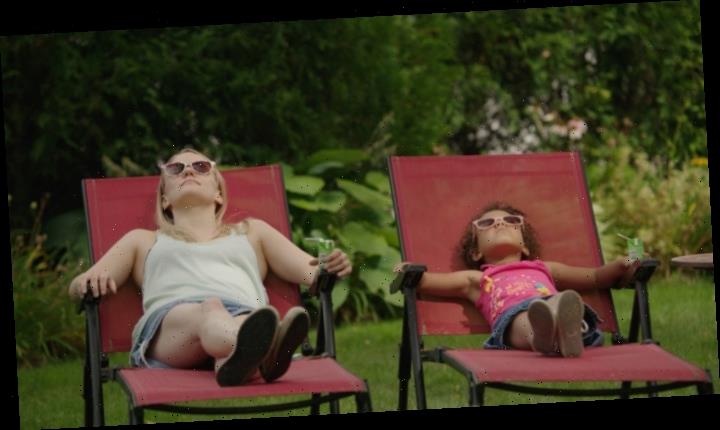 At 34, Bridget doesn’t know what she wants, but she knows she doesn’t want a baby — not now, at least — and so she doesn’t hesitate to make the decision that might’ve served as the focal point of a different kind of film. In “Saint Frances,” getting an abortion is just one of the many things that happens to Bridget, and the casualness with which it’s presented will outrage some. That’s fine. But their outrage has been so oppressive for so long that it’s been silencing filmmakers’ ability to address something that nearly a quarter of adult American women have experienced.

As Bridget’s mom says in one of the film’s typically frank conversations, “It’s the truth, and women should talk about it more often.” Turns out there are a lot of things that have gone unsaid in movies until now, and “Saint Frances” goes there in a way that’s not only enlightening, but entertaining as well. This exceptionally frank, refreshingly nonjudgmental indie was written by and stars Kelly O’Sullivan, a “girl next door” type whose no-nonsense approach to issues facing both her gender and her generation leaves ample room for laughter — à la Amy Schumer’s “Trainwreck.”

But unlike that Judd Apatow-produced studio entry, “Saint Frances” shares none of the pressure to partner up its potentially “unlikable” female protagonist with a man who can handle her baggage. I put “unlikable” in quotes because I adore this character: Bridget makes a lot of bad choices (who doesn’t?) and seems totally unprepared for most of what life throws at her (she’s the last candidate most folks would hire as a nanny), but she feels as human as they come. So a better comparison might be the work of “Girls” creator Lena Dunham, as O’Sullivan embraces her own fallibility, renders it into fiction, then presents it as comedy.

Named after the kid Bridget is hired to babysit, “Saint Frances” was directed by O’Sullivan’s partner, Alex Thompson, who works in service of her screenplay at every turn. His casual, unobtrusive style complements O’Sullivan’s agenda — to demystify what she’s been through — while bringing out the best in the predominantly female ensemble, the way that last year’s “The Last Black Man in San Francisco” was directed by a white guy, but created in close collaboration with its leading man.

Full disclosure: As a gay man, much of what we might call the “female experience” is a mystery to me. Movies shy away from it. I could glean only so much from reading “Are You There God? It’s Me, Margaret.” in middle school (thank you, Judy Blume, for writing it). At times, in my line of work, I’ve found myself in guy-talk circles where colleagues discuss the recent push to see more women behind the camera. Most of the time, these conversations feel constructive, but I will never forget one in which a fellow film writer joked, “Great. Now we’re going to get a whole lot of movies about menstruation.”

“Saint Frances” isn’t a movie about menstruation per se, but it’s as close as I’ve come to witnessing one. Bridget bleeds, and that’s OK. In the opening scene, she strikes out with a guy her age (the successful kind, who loses interest when Bridget tells him she works as a server) and winds up hooking up with a 8-years-younger dude named Jace (Max Lipchitz) instead. The next morning, she finds blood on her face, on his face, on the sheets. “I don’t think I had, uh, started when you were going down on me,” she says, and the moment becomes a bonding experience — between them, but also between the audience and the film.

Hollywood studios don’t make scenes like this, but they should. Such a moment will always be awkward, and “Saint Frances” plays it for uncomfortable laughs, but maybe it wouldn’t be quite so awkward if and when it happens to you if you’d seen something like it before on-screen. As a millennial (whereas Bridget identifies as being “on the cusp”), Jace seems more in touch with his feelings than she does. He keeps an emotions journal, and doesn’t mind discussing its contents. That makes him a little high-maintenance for her taste. She’s not looking for anything serious — not in life, not in love, not in general — which is how this young woman, who held so much promise a dozen years earlier (judging by former Northwestern classmates who say as much), comes to work as a nanny.

She’s hired by a lesbian couple, Maya (Charin Alvarez) and Annie (Lily Mojekwu), who need help caring for their 6-year-old (played by Ramona Edith-Williams not as “precocious,” but simply as someone who’s never talked down to by the adults around her) while Maya delivers their second child. A lesbian couple? Some might read that and roll their eyes. The movie keeps stacking details that will drive conservative audiences crazy, but they never feel contrived. While Bridget keeps her abortion to herself, the movie shows Maya coping with postpartum depression — yet another perfectly human experience that goes underrepresented in movies — and Alvarez elicits empathy without overdoing it in portraying the fragility she feels. It’s my favorite performance of the year (2019, I mean, when the film premiered at SXSW).

To an extent, caring for Frances forces Bridget to grow up, or at least to assume some responsibility amid the trial-and-error pattern of her choices. But instead of being didactic about what Bridget should do, “Saint Frances”  takes a stand in letting the character figure things out for herself, while illuminating those things — like pregnancy and her period — that she shouldn’t have to. Frances’ two moms aren’t shy about such subjects with their daughter. “I have to find something most comfortable for my body, because every woman’s body is different,” Frances says at one point, and we laugh, because she’s clearly reciting what she’s been told. But it’s the truth, and women should talk about it more often.