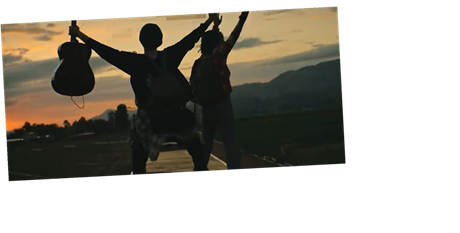 A young couple escape a bad situation at home by hitting the open road in Sam Hunt’s short-film video for the song “Young Once.”

Directed by Tim Mattia, the video follows two teens as they hop a train to flee their busted lives in what appears to be the California desert. They scavenge for food (uneaten pizza or picked oranges are a day’s meal), hole up in a motel, and run afoul of both rednecks and the cops, while just trying to find some peace. Hunt himself is mostly nonexistent in the video, except for a blink-and-you’ll-miss-him cameo in a diner near the end. There’s also a sign that reads “Southside,” a nod to the name of Hunt’s new album, and a shot of the motel from his “Hard to Forget” video.

But it’s his lyrics that drive the story. “We were young once/we were gung-ho, singing in the sun once,” Hunt sings, adapting what, on the surface, sound like carefree descriptions of youth for a tale of necessary transience.

Earlier this week, Hunt appeared on Stephen Colbert’s show for a remote performance of “Hard to Forget.” Southside, the Georgia native’s second full-length, topped the country charts upon its release on April 3rd.