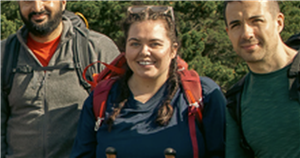 Scarlett Moffatt is set to explore her faith as she is one of seven celebrities with differing beliefs appearing on BBC Two's The Pilgrimage: The Road to the Scottish Isles.

A statement teasing the new series reads: "Over fifteen days, the seven pilgrims will follow in the footsteps of the sixth century Irish monk, Saint Columba , seeking out his legacy as a key figure in early British Christianity who helped spread the faith from Ireland to Scotland and beyond.

"Following ancient pilgrimages and heritage walking trails, the celebrity pilgrims begin their journey in the town of Donegal in the Republic of Ireland, then travel through Northern Ireland and over the sea by boat to western Scotland. "From there, they head up towards the Highlands before exploring the Hebridean Isle of Lewis and Harris. They go to Stornaway and then to the Calanais Stones before arriving at their final destination, Iona, a tiny island in the Inner Hebrides and the site of Saint Columba’s most revered monastery.

"Covering more than 1600km, they visit places of worship, from pagan stones to an early Christian cave and a contemporary mosque and Sikh temple. This journey will test the pilgrims not just spiritually but physically too." Talking about why joining this pilgrimage is important to her, Scarlett said: "At school, I spent a lot of time just reading books and on my own and so that’s how I got into faith really. It just felt calming.

"There’s almost a stigma attached to sort of being religious. Whenever I would tell my friends, they’d laugh and I’d be like: 'Why is that funny?' I believe in God, there has to be something that started all this.

"I would describe myself as Christian, but not a strict Christian. I don’t go to church, but I definitely believe and religion to me is security.

"In my head somebody on a pilgrimage is in a loin cloth and they have really long hair… and they look a bit dehydrated like they need a good moisturiser mask.

"I’m doing the pilgrimage as I want to know what my religion is. I want to be able to answer that question with confidence."

The Pilgrimage: The Road to the Scottish Isles returns to BBC Two and iPlayer in the Spring 2022.

For all the latest Scarlett Moffatt news,sign up to our daily OK! Newsletter .