Officials at the Sydney Cricket Ground are hoping the venue can host a crowd of more than 10,000 for the third Test between Australia and India as people who visited dozens of COVID-19 hotspots are banned from attending.

NSW recorded zero cases of local transmission on Monday but two cases linked to the growing bottle shop cluster in Berala in western Sydney will be included in Tuesday's figures. 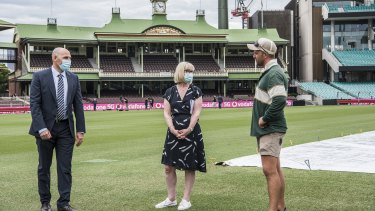 Venues NSW boss Kerrie Mather (centre) says capacity at the ground will be reduced to 25 per cent for the third Test.Credit:Steven Siewert

Venues NSW, which runs the SCG, confirmed on Monday it would reduce capacity at the ground to 25 per cent for the first day of the Test on Thursday but stressed the situation remained "fluid".

Chief executive Kerrie Mather said the numbers could be increased during the Test.

"I think the capacity of 25 per cent is where we're starting," she said.

"Our plan is scalable, so if there was the opportunity in what is a very fluid environment and an improving situation to host more, we could certainly host more."

Ms Mather said all fans would be expected to wear masks, which are compulsory in many indoor settings in Greater Sydney, but residents from some areas, including dozens of COVID-19 case locations around Berala and the upper part of the northern beaches, are banned.

"Patrons who reside in certain at-risk areas, as identified by NSW Health, are not able to attend," Ms Mather said.

It is the first time NSW has experienced a 24-hour period without cases since December 16, the day before two close contacts from the Avalon area and a patient transport worker who dealt with returned overseas travellers tested positive.

Acting Premier John Barilaro said increased testing was crucial for the response and hoped the daily testing numbers could reach as high as 50,000.

"My plea today for those in western Sydney, please come out in numbers," he said.

The upper part of the northern beaches remains under stay-at-home orders until January 9 despite dwindling case numbers, but NSW Chief Health Officer Kerry Chant said authorities "want to make sure we've got long enough to extinguish it totally".

Dr Chant said the lockdown in the northern beaches was particularly effective because it is a peninsula and the two venues involved in the outbreak were largely visited by locals.

"We're now dealing with a different cluster in Berala and the tools we use to control it need to be cognisant of that environment," Dr Chant said.

Mr Barilaro ruled out any further lockdowns in Sydney, including in the Cumberland area.

"Now, can I make this absolutely clear that, we leave everything on the table, but I can make this clear today – there won't be any lockdown of the Cumberland area, no other lockdown in any other parts of Sydney," Mr Barilaro said.

He urged people from the regions to "reconsider" travelling to Sydney for the Test, warning they "could take it [COVID-19] back to a regional area".

Meanwhile, a wedding venue in south-west Sydney was fined $5000 for breaching the Public Health Order at the weekend.

Police attended Paradiso Receptions in Fairfield about 9.30pm on Saturday amid concerns about the size of an event taking place at the site, which has an advertised capacity of up to 1100 attendees.

Acting Police Commissioner Mal Lanyon said between 600 and 700 people were at the wedding, despite its COVIDSafe plan allowing for only half that number.

Get our Coronavirus Update newsletter

Stay across the news you need to know related to the pandemic. Sent Monday and Thursday. Sign up here.

Related posts:
Latest News:
Amazon Prime Video Outlines Plans for Mexican Originals, Regional COVID Relief
Gogglebox's Tom Malone reveals show secret fans might not have spotted as the family arrange cakes in 'rude positions'
Disney+ doubles TV collection with huge drop of classic shows including Lost and 24 – here’s the full Star line-up
The Repair Shop leaves viewers 'in floods of tears' as widow has late husband's only memento from WWII restored
Recent Posts
This website uses cookies to improve your user experience and to provide you with advertisements that are relevant to your interests. By continuing to browse the site you are agreeing to our use of cookies.Ok