Sean Lock joked about his obituary in heartbreaking throwback clip 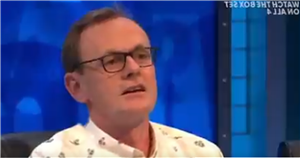 A video has emerged of Sean Lock heartbreakingly joking about what he wanted his obituary to say.

On Wednesday, the 8 Out Of 10 Cats star's agent announced that he had tragically passed away at age 58 following a battle with cancer.

And tributes to the beloved late television personality have poured in on social media, with one fan sharing a throwback 2016 clip of him on 8 out of 10 Cats Does Countdown when asked what he'd like his obituary to say by Jimmy Carr.

"Don't care… I'll be dead!" Sean said before adding with his dry sense of humour: "Well ideally, I'd like it to say 'noooooo, whyyyyy, nooooo, ahhhhhh'."

"You can't write tears, Jimmy," Sean added as the studio audience erupted into laughter in the clip, which is now a poignant reminder of his wit and talents.

Jimmy was one of the hoards of celebrities and fans who paid tribute to Sean, tweeting: "'Brutal news about Sean Lock today.

"I loved him. I'm watching clips of him right now – laughing & crying. I'll miss him so much.'

In a statement confirming his passing hours earlier, Sean's agent wrote: "It is with great sadness that we have to announce the death of Sean Lock.

"He died at home from cancer, surrounded by his family. Sean was one of Britain's finest comedians, his boundless creativity, lightning wit and the absurdist brilliance of his work, marked him out as a unique voice in British comedy.

"Sean was also a cherished husband and father to three children.

"Sean will be sorely missed by all that knew him. We kindly request that the privacy of his family and children is respected at this difficult time."

Television star Sean was best known for appearing as a team captain on panel shows Out Of 10 Cats, and 8 Out Of 10 Cats Does Countdown.

He was previously diagnosed with skin cancer in 1990, before his career as a comedian kicked off.

Sean blamed the diagnosis on not paying much attention to what he was wearing while he worked stripping concrete. He made a full recovery and pursued a career in comedy.