They can’t say the words “Super Bowl LV,” but we can 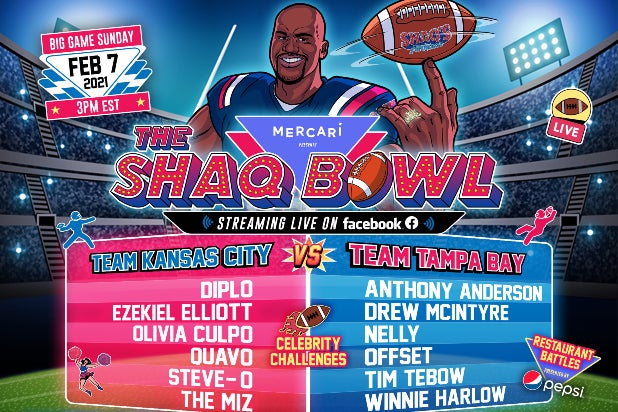 Already over the “Puppy Bowl”? Not yet ready for some official Super Bowl LV pregame coverage on CBS? Well, Shaq’s got your back.

Shaquille O’Neal is putting on an alternative pregame show (of sorts) on Super Bowl Sunday, Feb. 7. It’s called “The Shaq Bowl,” obvi. “The Shaq Bowl” is a rebranded version of Shaq’s Fun House, which had been the name of O’Neal’s Super Bowl party for the past two years.

Broadcasting live from Tampa, Florida in a custom-built Shaq Bowl stadium, the streaming option will feature athletes, celebrities, and musicians competing in team-based challenges. The three-hour live starts at 3 p.m. ET/noon PT. It will be available for free at ShaqBowl.com, on Facebook and other social media platforms including YouTube, Twitch, TikTok and Twitter.

The festivities will be produced by Medium Rare.

“With no in person events this year, I teamed up with Mercari to create The Shaq Bowl and connect Americans on the biggest day for sports of the year,” the former NBA great and current TNT analyst said in a statement on Thursday. “Featuring a ton of my celebrity friends competing in viral challenges, plus superstar musical artists all live from Tampa, prepare for the most fun and action packed Big Game Sunday show ever!”

And what would Super Bowl Sunday be without a halftime show — specifically one sponsored by Pepsi?

The Shaq Bowl Halftime Show, presented by Pepsi Stronger Together (that’s the soda brand’s series of grassroots initiatives bringing tailored programming to communities around the country) will feature Migos. Hey, Offset and Quavo were already there anyway.

Additionally, there will be a restaurant battle among four local-area restaurants competing for $10,000.