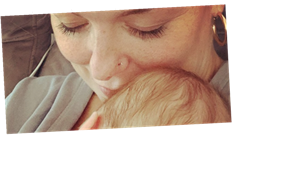 Sheridan Smith has told the trolls to leave her and her baby son Billy “alone” in an impassioned message.

The Cilla actress, 39, posted a collage of throwback snaps of herself as baby to tell her 480,000 followers how much her son, whom she welcomed in May this year, looks like her.

Sheridan’s photos show her as a baby, but she did not post any snaps of her adorable baby son.

Mum-of-one Sheridan, 39, then explained why in the caption of the now-deleted post.

The Two Pints of Lager actress said: “I won't be putting pics of the boy up on social media.

“But basically … he looks like a male version of me. Just less 80's and more handsome! God love him! we all send our love.”

Many fans understood Sheridan's reasoning, but some trolls couldn’t help but use the opportunity to make a dig at the actress, who recently vowed to be the best mum in the world.

One scathed: “But you'll happily abuse his right to privacy to make TV documentaries. And cash. The hypocrisy of Sheridan.”

Sheridan hit back at the troll as she replied with: “He wasn't in it but I'm sorry you feel that way. I was just expressing my mental health issues and hoping to help others.x.”

She was also backed by former Strictly Come Dancing professional Kevin Clifton who wrote: “I really don't understand the mindset of people who make these comments.”

In a heartbreaking further reply, Sheridan pleaded: “My boy is the only thing that keeps me going. Please leave us alone.”

It comes after Sheridan opened up about fears her mental health struggles would return after the birth of her son Billy, who she shares with fiancé Jamie Horn. She said: “My dad died and I think things that I hadn’t dealt with caused the big explosion, mentally. It was like a bomb went off in my head.

“Now I feel like I’ve got a second chance at life.

“It’s such a huge thing to have a baby. If you’ve had a mental health issue in the past, you worry it will rear its ugly head again. I would hate for the wheels to come off.”

She continued: “It’s the best feeling in the world! I mean, I’ve left it later in life but I think it’s probably the right thing. I wasn’t ready before I met Jamie and now I’ve got this little family and I just feel – I can’t explain it – like a contentment, a calm.

“Maybe I was looking for something in the wrong places and now I feel like I’ve found it in this little boy.”