Former Labor leader Bill Shorten has blasted a Greens call to halve Australia’s defence spending and scrap the nation’s nuclear submarine deal should the party form a power-sharing government after the next federal election.

Mr Shorten said Labor had been “very clear” it was not interested in forming any coalition with the Greens, which was in effect proposing “one rifle for every two soldiers”. 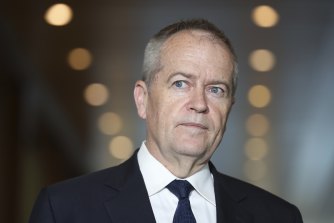 The 10-member Greens party announced this week it would negotiate with Labor to reduce the defence budget to 1 per cent of gross domestic product if it gained the balance of power, making $312 billion available over the next decade for essential services.

Senator Jordon Steele-John pointed to New Zealand’s lightly armed defence force as the “gold standard” Australia should aspire to, saying the nation needed a “readily deployable and highly mobile force that is commensurate with our size and location”.

But Mr Shorten said cutting Australia’s annual $44 billion defence budget in half was “bonkers” and perhaps the Greens should be telling China to slash its own spending of $300 billion each year.

Speaking to reporters in Canberra on Thursday, he said the NZ-style defence policy worked only because the country could depend on Australia.

“Ironically if we adopted the Greens defence policy, which we shouldn’t, we’d be more dependent on the US than we are now,” Mr Shorten said. “If you cut the budget in half as they propose, that means we’re sending our men and women into harm’s way with inferior equipment.

The Greens say their plan for peace would also involve renegotiating the AUKUS security pact struck last month with the United States and Britain to share military technology and help Canberra build a fleet of nuclear-powered submarines, and closing all foreign military bases across Australia.

Mr Shorten, who is Labor’s spokesman for government services, said nuclear propulsion would make Australia’s submarines a more effective deterrent than diesel submarines because they could go further and faster underwater.

“Why would we want an inferior deterrence system?” Mr Shorten said.

The Greens’ policy announcement coincided with the 20th anniversary this week of the invasion of Afghanistan. The party is pushing for new laws requiring parliamentary approval for the nation to go to war.

Senator Steele-John said with the $300 billion that would be available through defence cuts, Australia could build 1 million homes, get dental and mental health into Medicare and increase income support.

“This is the plan we need to ensure a peaceful future for our country. Our plan will make Australia a better global citizen, and can ensure everyone in our community has what they need to live a good life,” he said.

Greens leader Adam Bandt has named nine target seats for the party in a bid to gain the balance of power, calculating this is far more likely than an outright Labor victory on polling.

While major parties usually warn voters against minority government, the Greens are seeking to use the prospect to their advantage by telling voters this is the most likely way to remove Scott Morrison as Prime Minister.

The plan is based on an electoral analysis that shows a uniform swing of 0.6 per cent against the Coalition would be enough to create a hung Parliament and a chance for Labor to form minority government with the Greens.

Fascinating answers to perplexing questions delivered to your inbox every week. Sign up to get our new Explainer newsletter here.