It’s bad enough for audiences having to sit through shows we would normally stand – or jump or dance or both – and sweat in. But how hard must it be for the artists, especially those for whom polite performance, warm but contained response, and a sense of decorum are anathema?

Not everyone can pull it off, or certainly not immediately. Midnight Oil – a better, bigger band, with a deeper catalogue than regional Victoria’s The Smith Street Band – struggled for a good half hour in this room a few weeks ago. 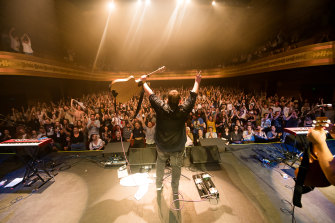 The Smith Street Band harness their not-so-secret weapon: the deep connection between fans and band.Credit:Ian Laidlaw

Yet here were “the Smiffies”, led – from the charging, grinning, guitar-touting front – by Wil Wagner, nailing it from the first moments. Not with volume: this was ostensibly an acoustic show, though everything was still plugged in. Nor exhortations for us to abandon our control: it wasn’t until the last song, the communal rush of the suburban anthem of existence-as-resistance, Death To The Lads, that the room said no más and stood up, stood on seats, stood out, belting “Death to the lads/As loud as we possibly can”.

It happened with the group’s not-so-secret weapon: the connection between fan and band that immediately formed into the shape of a communal exchange of lyrics, of good humour and genuine warmth.

Wagner’s stories of the quotidian are without poetic flash but never without the eye for the resonant image and the truth, a pairing that works its own poetic path. Packed into songs that in this arrangement emphasise the band’s connection to a roistering punk folk equal parts Weddings Parties Anything and The Pogues, The Smith Street Band made a seated room feel like a boot-stamping, air-punching, hug-your-mate session.

It’s worth noting that the room that would have had close to an even split of the sexes and the classes, so it was never about bloke-iness, or chest-beating, or separateness of any sort. And it proved the lie, or at least the past tense, of Dirty Water’s lines that “I have fallen out of love with people”.

Wagner hasn’t, and nor have his fans. And no one missed that message, seated, standing or wending our way out in COVID-safe manner 70 minutes later.