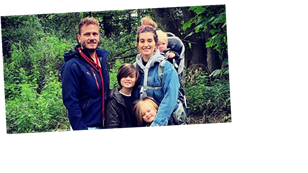 From Emmerdale to EastEnders to Coronation Street and more, we in Britain love watching soaps.

From the comfort of our homes we watch relationships form and break, scandal, tears and tantrums and moments that warm the cockles of our hearts.

But what about what happens when the cameras stop rolling?

Well, it seems that many real-life relationships happen between co-stars and some have actually gone on to have kids of their own.

Let's take a look at the soap couples that ended up having children together… who know doubt will grow up to be brilliant thespians!

Coronation Street legend Alan Halsall plays Tyrone Dobbs on the hit soap, and his ex wife Lucy-Jo also was once a favourite on the cobbles, playing Katy Harris.

The duo went on to have a nine-year-long relationship and were married in 2009, eventually splitting in 2016.

They have a daughter together called Sienna-Rae who is seven years old.

The famous duo then went on to have a little girl named Polly in 2011, however they split up in 2013.

When Tina O'Brien and Ryan Thomas' characters Sarah-Louise and Jason got together on screen, love was actually blossoming behind the camera too.

The pair became an item in 2003, and went on to have a daughter called Scarlett, who is now 10.

Even though the duo split, they have remained good friends.

However, these two did not meet on the job, and have actually been together since they were both at drama college.

The duo married in 2003 and have since welcomed two children, Violet and Stan.

Charley Webb and Matthew Wolfenden first met on the set of Emmerdale in 2006, and the pair began dating a couple of years later.

The gorgeous couple married in secret in 2018, and have three children together; Buster, nine, Bowie, three, and their third little boy — Ace Gene.

If that isn't a successful romance, we don't know what is!

EastEnders stars: Past and present

Back in July, the couple have had a baby boy, who has the spectacular name of Ocean-Torin Scanlan.

The two are became engaged in 2018, and they have recently welcomed their first child.

The soap star couple took to Instagram to announce the very exciting news that they had welcomed a son, and revealed his name too.

The pair shared a series of adorable snaps of the newborn, and Laura, 37, wrote alongside them: “So, on Friday Jan 29th at 1.30am we managed to bring this little champ into the world.

“It was the most incredible, surreal experience I have ever had and probably ever will and my tiny mind is blown.

“He is perfect and we’re all so happy to welcome him to the fam. Jesse Jordon we’re all head over heels IN LOVE with you.

“@daddyjordon you were the BEST birthing partner would absolutely not be in one piece without you and @roh_birthcentre are amazing!!

"All the girls but espesh Amy our midwife who is some sort of super hero.”