An Army chef will today set a new world record by completing his 30th consecutive walking marthon with a 28kg load on his back to raise money for veterans’ charities.

Richard Lake, from Grantham, who has been a reservist chef for the Royal Logistic Corps since 2016, explained that he set up a charity fundraiser to show support for his friend Simon, 50, who has been battling mental health issues.

Since suffering a life-changing injury in 2015, Simon has been supported by Battle Back Golf, which helps him to ‘keep his demons at bay’, and Richard is close to reaching his £5,000 fundraising target, which will also be shared with the organisation Detecting for Veterans. 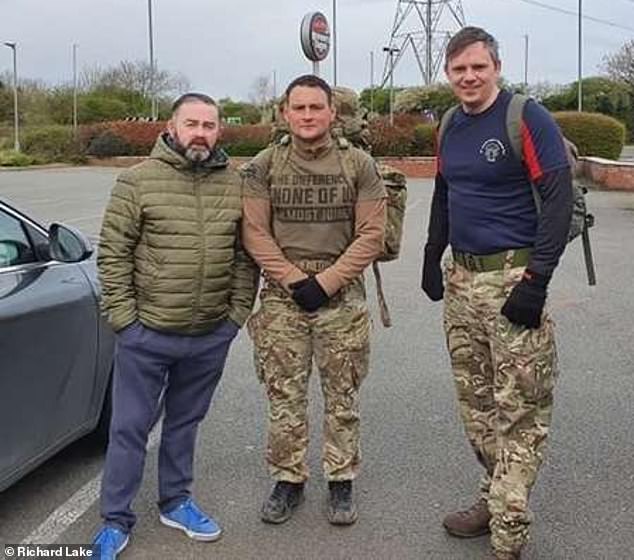 Richard Lake, 26, from Grantham is attempting to raise £5,000 for the charities who’ve helped his friend Simon, 50, since his life-changing injury. Pictured left to right: David Lake, Richard Lake and Craig Tait

He began the task of walking 26.2 miles per day consecutively on Monday 22nd March 2021, and will be the first person to complete 30 back-to-back marathons carrying a 28k weight.

Richard said: ‘In November 2015, Simon who initially went into hospital to have his thyroid removed ended up having a tracheostomy which ended his 28-year military career and permanently changed his life.’

The pair met through Richard’s father who served with Simon in the Army Catering Corps together.

‘My finest memory of Simon is when he attended my wedding in 2019,’ Richard said.

‘Simon was the life and soul of the party making all guests laugh non stop. I was devastated to hear Simon suffered a life-changing injury. It hit me hard when I was told he died three times on the operating table. I will be forever grateful that Simon is still here today.’

He said the 50-year-old was at his lowest and plagued with suicidal thoughts, when a friend introduced him to Battle Back Golf in 2017.

‘Simon has represented Battle Back Golf in a Ryder Cup style competition against Australian injured veterans both in Australia and the U.K at Celtic Manor. In Simon’s words ‘The banter and friendship is like being back in the military,’ Richard said.

‘Golf is now what gets Simon through day to day life. A golf course is where he can keep his demons at bay because all he is focusing on his playing his next shot.’ 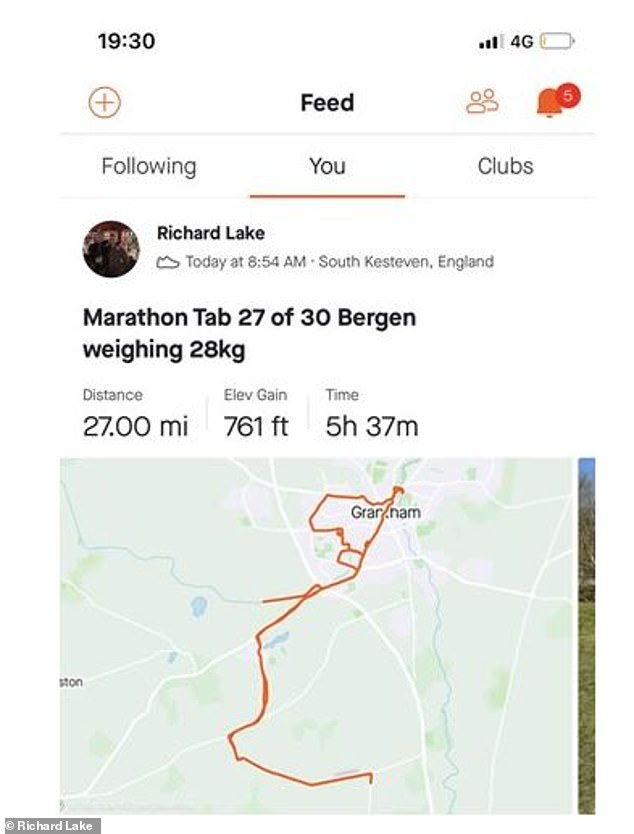 Richard said in addition to the grueling miles he’s tabbing (pictured), it’s been a challenge to spread awareness of his fundraiser

Richard who has also battled with his mental health, said that Simon’s struggles got worse during during lockdown, which is what inspired him to do a fundraiser.

‘Battle Back Golf is a military initiative. It has helped hundreds of serving personnel and veterans accept their injuries through playing golf. I would love to see an organisation like this in civvy street to help those who have been injured or are sick accept their condition and find a purpose again.’

Battle Back Golf was founded at the Defence Medical Rehabilitation Centre, Headley Court in 2009, with the aim of using golf to support wounded, injured and sick (WIS) service personnel.

Over the years the programme has proved successful in supplementing the physical, psycological and cognitive rehabilitation of over 200 serving and veteran personnel.

Richard explained that he’s also raising awareness and funds for Detecting for Veterans because the hobby of metal detecting has helped many veterans to build friendships, improve their mental health and cope with PTSD.

Richard added: ‘I am truly grateful for all the support that the people of my home town Grantham have shown me. It truly has knocked me off my feet and I am still waiting for it to sink in.

‘We find ourselves in difficult times and yet people are still full of generosity. Knowing that the veterans of Battle Back Golf and Detecting for Veterans are going to benefit from what I am doing fills me with pride. Knowing that they are benefiting from this proves to me that I have succeeded in what I set out to achieve.’

For more information and to donate visit justgiving.com/crowdfunding/richard-lake-5?utm_term=VWmmjezy9