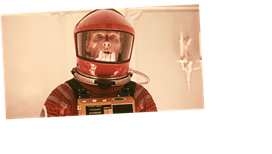 One of the most iconic costumes in film history is heading to auction this month courtesy of Julien’s Auctions in Beverly Hills, California. The auction house is putting over 900 items from Hollywood films and television shows up for auction on July 17 and July 18, including the space suit worn by actor Keir Dullea in Stanley Kubrick’s “2001: A Space Odyssey.” The space suit is the crown jewel of the “Hollywood Legends & Explorers” auction and is expected to sell in the $200,000-$300,000 range. The auction will take place in person and live online.

Per Julien’s Auctions official auction description: “The near complete space suit, also worn by different actors in many scenes throughout the film, comes with the MGM shipping crate, boots, and helmet. The helmet features four distinct layers of paint, indicating that it was used in different scenes by multiple actors and representing a number of characters.”

The helmet has a base layer of green, indicating that it is “the green helmet worn by Dullea in one of the most famous science fiction scenes of all time, when his character Dr. Bowman reenters the antechamber of the Discovery ship leading to the ‘brain room’ and logic center to ‘kill’ HAL.”

“Julien’s Auctions is honored to offer one of the most coveted science fiction film artifacts of all time — an original ‘2001: A Space Odyssey’ space suit — at this year’s Legends and Explorers event,” Julien’s Auctions CEO and president Darren Julien said in a statement. “’2001: A Space Odyssey’ broke ground in its realistic depiction of space travel in films and this auction represents the first opportunity in twenty years to purchase a genuine and rare complete ‘2001’ space suit from Stanley Kubrick’s masterpiece.”

Other notable items being auctioned off during the event include John Williams’ “Star Wars” music score sketches, the pipe used by Sir Ian Holm as Bilbo Baggins in “The Lord of the Rings,” hazmat suit costumes worn by Bryan Cranston and Aaron Paul in “Breaking Bad,” and costumes from productions such as Netflix’s “Orange Is the New Black” and FX’s “Fargo” limited series. Head over to the Julien’s Auction website for a complete rundown of items for sale.